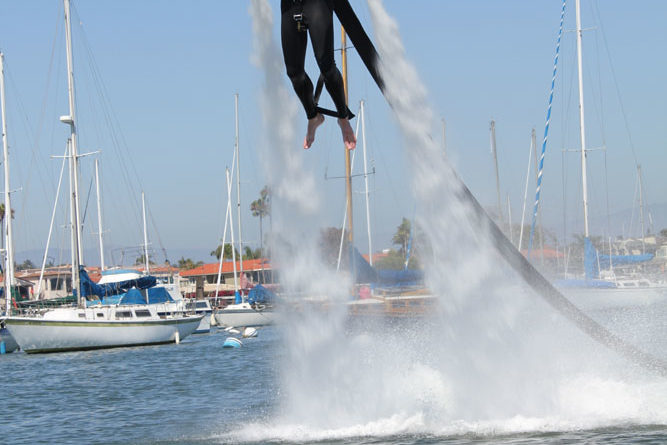 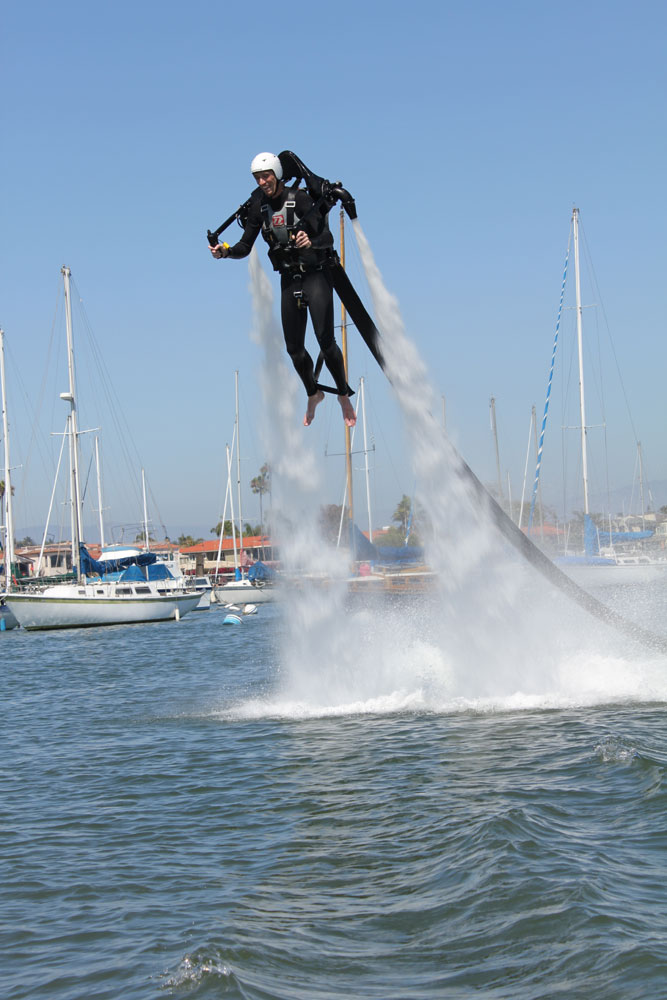 NEWPORT BEACH — In an effort to address concerns regarding new jet pack businesses seeking Marine Activities Permits in Newport Harbor, the Harbor Commission created a subcommittee to investigate issues associated with the businesses during a meeting July 21.

City lawmakers agreed to impose a six-month ban on new permits for the upstart ventures June 24. The banishment follows apprehensions outlined by residents and staff regarding issues such as noise and injuries related to the companies. The formation of an ad hoc committee will better assist the council in their decision, the commission concluded.

“From what I understand the council would like [a recommendation] within 60 days,” Harbor Commissioner Brad Avery said.

Jet packs are propelled by water above the surface of the harbor. Typical devices include a shoulder harness adjoined to a customized watercraft, which propels riders skyward through a water-pumping hose.

“In my opinion, I think it would behoove the Harbor Commission to get to work immediately and shoot for at least bringing an update to the committee in August and perhaps a recommendation in September,” Harbor Resources Manager Chris Miller said. “A recommendation to do nothing or create new rules, that’s up to the committee.”

Currently, Jetpack America is the only company of its kind operating in the harbor. Two other companies were in the process of obtaining a permit prior to the suspension.

“The current operator can proceed with business as normal,” Miller said.

Jetpack America owner Dean O’ Malley told the commission he is onboard with having a public discussion.

“We want to work with you guys and find a best way to allow us to move forward,” O’ Malley said. “We know that we’re a unique operation. We’re hoping to find a solution that will work for the city, with the residents, with the visitors and tourists. We understand the noise issues and we understand the disruption. We also see the value to the city as it draws people in.”

George Farah, a resident of Newport Beach, told the commission he has endured the noise issues associated with O’ Malley’s business for some time.

“Our unit is on the third floor,” Farah said. “We’ve been exposed to this operator and we tried to work with him the last year. They do sound like a vacuum cleaner or a big truck operating. They’re extremely loud and you can’t focus and you can’t work. It’s very physically stressful.”

Fly Jet Sports President and CEO Gus Caicedo, who is vying for a permit, said he is also open to discussion with the committee. His operation allows riders to traverse on a board attached to a jet ski and has picked up clients on the docks of such restaurants as The Rusty Pelican and Woody’s.

Study sessions and public meetings on the topic will be scheduled in upcoming months.

In other news, Harbor Commissioner Paul Bank discussed the Outreach Subcommittee’s plan to host a Saturday morning ferry ride that will allow up to 60 members of the public to join commissioners on a tour of the harbor.

“The objective that the subcommittee is working toward is to strengthen the Harbor Commission’s public outreach to better communicate the commission’s role, purpose and objectives as citizen’s advisory voice to the harbor community,” Bank said.

The 6.4 nautical mile voyage will last about two hours and will allow the public to gain familiarity with topics often reviewed by the commission, while also identifying additional harbor concerns. The event is proposed to take place in October pending City Council approval.

The Harbor Commission also elected officers for the 2014 to 2015 year, selecting Avery as chairman, David Girling as vice-chairman and Stapleton as secretary.