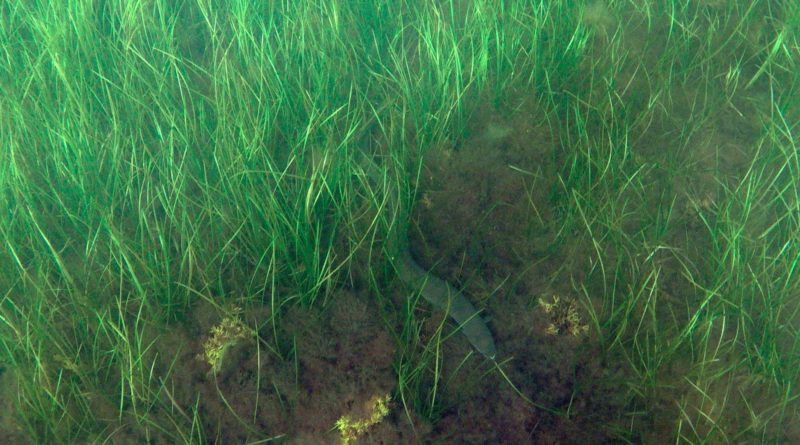 Zostera marina, known as eelgrass, is one of the more common types of seagrass in the world. It also provides a habitat for many marine species. (Jonas Gustafsson Twitter, @jonas_gus, photo)

According to city staff, the Regional General Permit 54 plan, which allows for dredging projects and eelgrass to coincide, has reaped benefits.

NEWPORT BEACH—Once a friend asked this reporter, “What the heck is eelgrass? Do eels live in it?” Staff at The Log cannot claim to be marine biologists, but according to National Oceanic and Atmospheric Administration (NOAA) eelgrass is considered “one of nature’s most valuable and productive habitats in the marine environment.” Though not explicitly stated whether it’s inhabited by eels, there are multiple species of it and waterfowl, sea turtles, Pacific herring and many other creatures make their home in eelgrass. The lack of eelgrass can also affect fisheries, oxygen levels in the water and can contribute to other issues that damage the ocean’s ecosystem.

For harbors and marinas that need to be dredged, however, eelgrass is a dilemma. As a protected species and a vital necessity to the ocean’s ecology, eelgrass needs to thrive – but for sailors and boaters going without a harbor dredging program can be dangerous. An important challenge to be met for Newport Beach, for example, was how to meet their desperate dredging needs vs. upholding the ecological importance of the dwindling plant species.

Eelgrass poses a problem to humans, but according to Newport Beach’s Harbor Resources Manager Chris Miller, eelgrass, in contrast to Christopher Nolan’s The Dark Knight, is the hero Newport’s waters needs right now. The marine plant species has allowed the city’s small-scale dredging program to take off where at one time the dredging need in Newport was dire.

Miller gave a presentation, at Newport Beach Harbor Commission’s meeting on May 8, on the progress of a Newport-Beach-specific eelgrass mitigation plan, which was approved by the California Coastal Commission in June 2015. The Log’s Parimal M. Rohit covered this topic when the program launched, writing, “Regional General Permit 54, or RPG 54, would give Newport Beach primary responsibility for small dredging projects up to 8,000 cubic yards per event (and 75,000 cubic yards per year) under and around existing docks.”

Time is running out on RPG 54, which expires in Dec. 2020 according to Miller, and the program is coming close to finishing out its term. Miller also stated the city-specific eelgrass mitigation program, an enterprising venture when it was embarked upon, has received compliments from harbor staff around California who are hoping or had hoped to try a similar approach in creating a plan of action for dredging around eelgrass. The Coastal Commission allowed for the temporary permit, RPG 54, to be put in place as the city monitored the impact of dredging to eelgrass ratio.

A biennial diver-based eelgrass survey has also been put in place in overseeing the plant’s reproduction as well as a GPS system. Harbor commissioners pointed out the mapping was not perfect, notably for detecting deep-sea eelgrass that divers could not easily access. However, through the city’s GIS system homeowners in the city – or anyone interested – can monitor the presence of eelgrass in the harbor.

Miller, wrapping up his presentation, added, “I am trying to be eelgrass’s biggest cheerleader … The more eelgrass we have, the more we can impact it. I’m promoting it with a smile on my face.”

It’s yet to be seen how the numbers will present themselves when RGP 54 is up and if the city will be able to continue the program in the future, but if all goes according to plan it may serve as an example as to how human operations and marine plants can coexist.

One thought on “How is Newport Beach’s city-specific eelgrass mitigation program faring?”