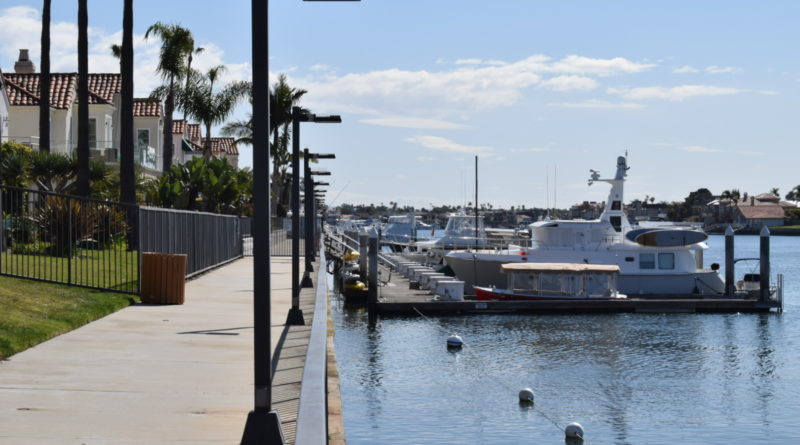 The Commission held their first ever meeting on March 28, 2019. What’s been accomplished this past year? What’s next for 2020?

“It’s mostly a residential harbor, there’s not really a lot of commercial activity,” Larkin said. “You get some restaurants, kayak rentals and such but when you compare it to Newport or Los Alamitos or Port of Long Beach, San Diego, etc., it’s pretty unique.”

Larkin and Harbor Commissioner Craig Schauppner said most of this first year has been about gathering information.

“Our first year of existence I would call it as informational,” Schauppner said. “Getting us up to speed on the process of working in government and what not and we received a series of briefings from various organizations.”

With several jurisdictions – city, county, state and federal – in charge of Huntington Harbour waters, the Harbor Commission has over the past year heard from various agencies including the State Lands Commission, Seal Beach Naval Weapon Station, Orange County Water District and Huntington Beach city manager as they work to find their sea legs among these various agencies. Schauppner said the commission aims to serve as the eyes and the ears of the harbor and provide a conduit between the city and various harbor stakeholders.

“That’s what we’re here to do is be the eyes and the ears,” Schauppner said.

The commission has identified four focus areas: safety, infrastructure, water quality and municipal codes. Ad-hoc committees have been working on each of those areas over the past year and will continue to do so this year.

“Because it’s a newer commission there’s not really projects that were ongoing and it’s been more of trying to be an advocate, giving representation of the harbor, bringing awareness for issues,” Larkin said.

In the safety category, Larkin said they are working with operators of standup paddle boards (SUPs) and kayaks to come up with a “rules of the road” guidance and safety training for people who are renting equipment. The commissioners said they are hoping to recommend policies to the city to be implemented this year, which could include providing SUPs and kayak renters with a placard with a map of the harbor and emergency numbers.

Another safety issue, brought to the attention of the commission from a citizen, is bridge jumping. The commissioners said they are working with the city on deterrence options, among them being adding lifeguards or some sort of enforcement presence at harbor beaches in the summer.

Larkin said they are also looking at lighting bridges and getting lighted buoys to help with navigational visibility.

On the infrastructure side of things, the commission is working on creating a comprehensive process for the issuance of permits to allow for private commercial business use of the harbor’s only public dock, which is situated in front of Huntington Harbour Yacht Club. The dock has been used for loading and unloading passengers by the handful of small commercial operations that operate harbor tours and 6-pack charters.

Larkin said they are also looking at developing a permitting process to assist homeowners trying to make repairs to a dock or seawall.

Like many other Southern California harbors, water quality and debris is a concern. The Commission met last year with the Orange County Water District and expressed an interest in efforts to prevent the flow of debris from the area’s watershed.

Larkin said they are also working to simplify the path of where residents look for assistance. He said with the involvement of multiple jurisdictions and agencies, there has always been a little confusion of who’s responsible for what or where to go. He said the Commission is planning harbor-halls and meet the commissioner events this year to help engage the community.

Going forward, Schauppner said the commission is looking to see some of these safety protocols and permitting process recommendations getting implemented this year, as well as having a proactive role in identifying needs of the harbor before they become challenges.

“We’re a neighborhood with streets and waterways so what are the unique challenges and what is it that the city should be doing or not doing in order to address these challenges?” Schauppner said.