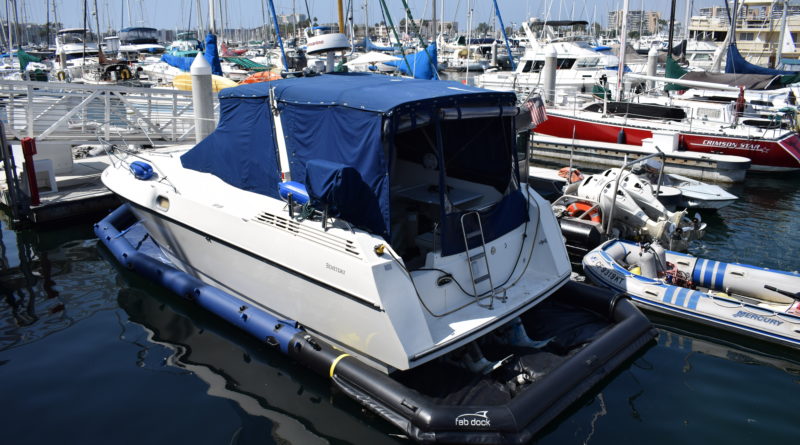 The FAB Dock dry docking system is one of the latest technologies county officials are testing to reduce copper leaching in the harbor.

MARINA DEL REY—The Los Angeles County Department of Beaches and Harbors is testing out two FAB Docks, an in-water dry docking system, as part of an effort to reduce copper leaching from antifouling paints on the bottom of boats.

On Sept. 23, Dean Howard, the founder of the Australia-based FAB Dock and DBH hosted a demonstration for the boating community at Marina del Rey Harbor to show how the FAB Dock works. It consists of a polyurethane bottom lining and inflatable bumper. The bumper deflates in the rear to allow the boat to drive in and out, a process Howard said takes about three to four minutes. Unlike a typical ‘wet’ slip liner, it uses pumps to remove the water from between the boat and liner to keep the hull dry when docked.

“This thing is designed to sit in the water and have zero maintenance,” Howard said.

Some raised concerns about needing to clean the underside of the FAB Dock or the possibility that it would get so heavy with growth it would sink, adding to the plastic in our waters. Howard said stuff does eventually grow on it but it does not damage it.

“The growth doesn’t hurt it, it doesn’t affect it,” Howard said.

Part of the department’s research into the FAB Dock will include looking at the growth on the bottom of a FAB Dock used by the Sea Scouts for about the past year. That FAB Dock was used in a pilot study, which started in September 2018. It was used by the Sea Scouts on a 21-foot motor boat and a second boat of similar size. According to DBH, the FAB Dock was very effective at keeping the boat hull clean. DBH Planner Jennifer Mongolo said they did not have to clean the bottom of the boat once during the pilot period.

DBH has now bought two FAB Docks and is working with two boaters in Anchorage 47 to further test how they work long-term. Mongolo said DBH is looking at this as a possible copper reduction strategy.

“There’s no one size fits all solution for all the boats in the harbor but this might work for some boats,” Mongolo said.

Copper levels currently found in the Marina del Rey Harbor water column exceed the 3.1 micrograms per liter regulatory limit set by the California Toxics Rule in 2000. Some of that has been blamed on antifouling paint from boats.

County officials have been trying to address copper pollution and Total Maximum Daily Loads (TMDLs) at Marina del Rey since 2014. The Regional Water Board issued a mandate that Marina del Rey reduce copper levels within local waters by 85 percent by March 2024.

However, Mongolo said since the TMDL regulations became effective, there has not been a significant reduction in dissolved copper and “additional efforts will need to be employed to meet compliance deadlines.” She said the county monitors copper levels in the harbor on a monthly basis.

He said so far, they have not found one that works very well but said paints with lower copper levels could be a happy medium. He said he is skeptical of the FAB Dock, saying he is not a proponent of putting more plastics into the water. However, he commended the county for their innovation.

“It’s good to try and the county’s been great about trying new technologies,” Schem said.

He added he thinks the best solution involves the Regional Water Board identifying the correct threshold limit for copper levels in Marina del Rey and switching to lower copper level paints with lower leach rates.

Mongolo said she expects to see lower copper rates in Marina del Rey in the next five years, thanks in part to a 2018 regulation. The regulation prohibits copper-based antifouling paints and coatings with a pre-established leach rate and prevents paint manufacturers from selling noncompliant paints to dealers of retailers.