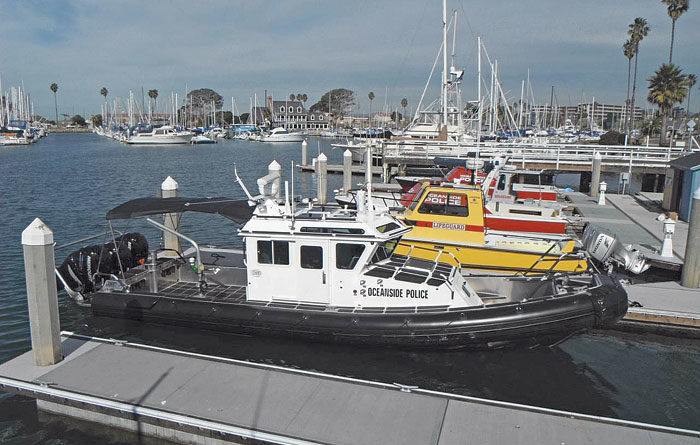 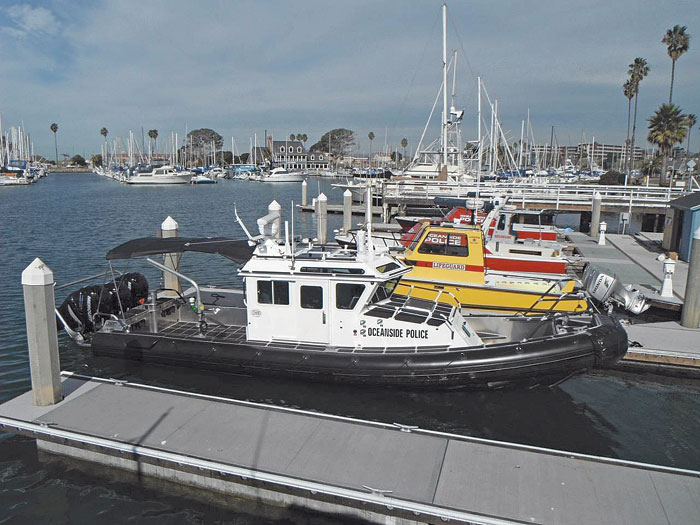 OCEANSIDE — The Harbor Unit of the Oceanside Police Department has a brand-new boat — and the flashy 35-footer has already made an impact.

With the capability of hitting speeds of up to 45 knots, the new vessel enhances the unit’s response time. The older vessels run at 25 knots.

“This expands our offshore capability,” said Sgt. Jeff Brandt of Oceanside Police Department’s Harbor Unit. “We have had rescue boats up to this point, and now we have a true offshore interdiction boat.”

Powered by three 300 hp Mercury Verado outboard engines, the boat has allowed the unit to “increase overlapping responsibilities with Orange County by making the run-outs easier,” given the boat’s performance and enhanced range of 300 miles.

With eight officers, one reserve member and one sergeant, the unit operates one safety boat and three Crystaliner rescue boats — equipped with GPS, radar and other electronics — that are used to provide rescues and towing. The Harbor Unit serves as the emergency response arm of the police department, providing maritime law enforcement, search and rescue operations, emergency towing, marine firefighting and scuba diving duties.

Responsible for Oceanside Harbor and 3.5 miles of coastline, the unit also provides assistance to the North Orange County coastline — a task that has become much easier with the new vessel.

“The red boats are open and more of a surf-type boat,” Sgt. Brandt explained. “You are encapsulated in this (new) boat, and you can just go.”

Approximately half the boat’s $1 million price was covered by a $737,000 grant that was awarded to the Oceanside Police Department in 2010. The grant is part of Operation Stonegarden, a program to enhance law enforcement preparedness and operational readiness along the United States borders.

Sgt. Brandt hopes the stars will align once more to secure a second Defender-class safe boat in the future. He plans to eventually replace at least one of the Crystaliners and expand the fleet.