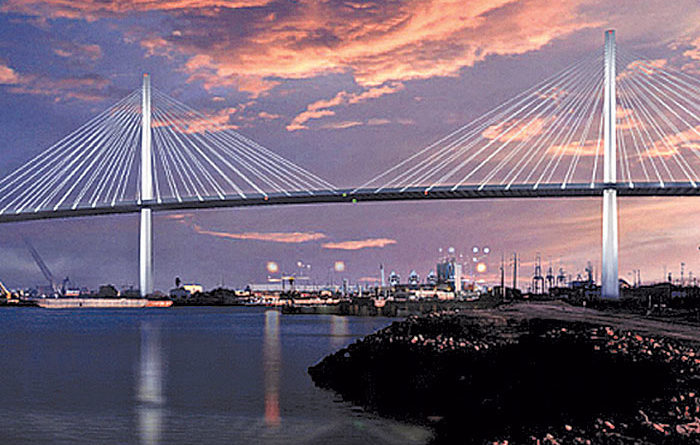 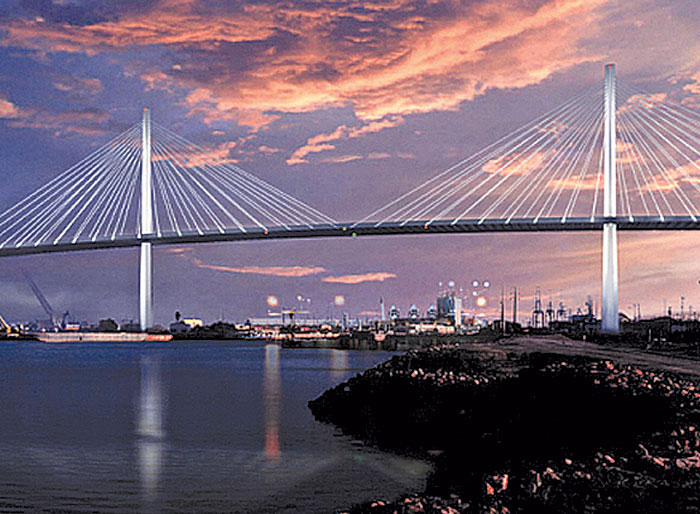 LONG BEACH — Port, federal, state and city officials gathered at the base of the Gerald Desmond Bridge Jan. 8 as two helicopters hovered 515 feet above the ground, demonstrating the height of the Port of Long Beach’s new cable-stayed bridge, once it is completed by 2016.

The celebration was to kick off construction of the nearly $1 billion Gerald Desmond Bridge replacement project that will replace the port’s main 1968-built bridge. The new bridge will allow the world’s largest cargo ships to pass under it safely and traverse into the harbor’s inner berths.

“This bridge is vital to freight movement and the nation’s economy,” said federal highway administrator Victor Mendez, after the helicopter demonstration. “The project will also relieve congestion on the road network that directly serves one of the nation’s busiest ports.”

With the twin 50-story-high towers, the new bridge will be one of the tallest cable-stayed bridges in the United States — and the first of its kind in California. The “high-wire” aerial demonstration by the helicopters gave attendees at the “groundbreaking” ceremony an idea of the impact of the massive and distinctive bridge’s design on the Southern California skyline.

“A world-class bridge will serve as a long-term investment in our port and create a new West Coast icon,” said Long Beach Mayor Bob Foster. “The Gerald Desmond Bridge Replacement Project is vital to our city, to our state and to our nation. This new bridge will bring lasting, positive economic impacts across many sectors.”

The replacement project will allow the original Gerald Desmond Bridge to remain in use while the new bridge is erected adjacent to it. The new bridge is among $4.5 billion in current and planned improvements to further modernize the Port of Long Beach and keep it competitive.

According to port officials, construction work on the new bridge will generate, on average, 3,000 jobs a year.

“A new bridge is vital to our port tenants, to our communities and to businesses around the world that depend on us to move their goods,” said Port of Long Beach executive director J. Christopher Lytle. “The new bridge will be a shining beacon for the world to see that we intend to remain a very modern port.”

The Gerald Desmond Bridge, which opened in 1968, provides a critical link from Terminal Island and the ports of Long Beach and Los Angeles to downtown Long Beach and the 710 Freeway.

Over the years, the bridge has begun deteriorating, resulting in workers attaching nets along the bottom of the bridge to catch falling concrete and debris, too keep it from landing in the water or on buildings below.

With deep channels and tall cranes, the Port of Long Beach already is serving the world’s biggest cargo ships at some of its piers, but the height of the current Gerald Desmond Bridge restricts these large ships from entering the inner channels. The new bridge will raise the clearance over the channel from 155 feet to 200 feet.

The new bridge also will improve speed and efficiency for land-based cargo movement and commuters, according to the port. Commuters account for three-quarters of bridge traffic, which is nearly 70,000 daily vehicle trips.

Other features of the new bridge include a bike path, a pedestrian path and scenic observation decks 200 feet above the water.

Construction costs on the new bridge will be about $650 million, with site preparation, demolition of the existing bridge and other considerations bringing the total project cost to $1 billion.