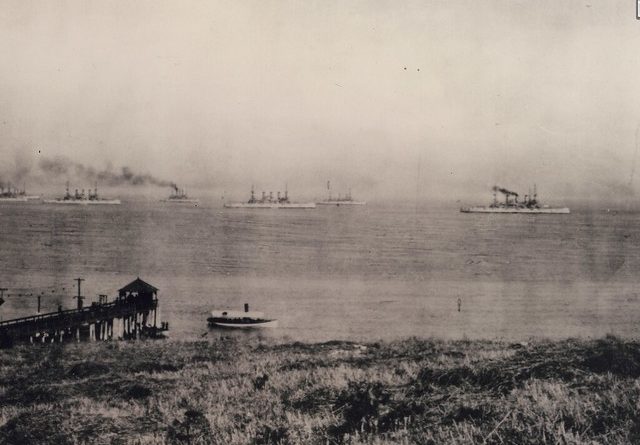 SANTA BARBARA—Pictured here, the Great White Fleet passes by Santa Barbara’s coastline in 1908. Pres. Theodore Roosevelt ordered this fleet of naval ships, all painted white, to sail around the world. Some sources have noted this move was an intimidation tactic during a time where anti-Japanese sentiment had been brewing. Roosevelt wanted the world to know how strong the American Navy was and to exhibit the nation’s power abroad during a time of peace. It also aimed to show Americans that its military was prepared to go to war if needed; the fleet made an impact and has been said to be one of the first acts that elevated America to a world power.

The Great White Fleet did make a 14-month tour around the world, including South America, Europe and Australia, and returned home to Hampton, Virginia on Feb. 22, 1909. Roosevelt, who would hand over the presidency to William Howard Taft in two weeks, later stated it was one of the most important actions he had taken during his term. The fleet also improved some world negotiations, especially with Japan, who agreed to sign the Root-Takahira Agreement after the visit.

Photo Courtesy of Santa Barbara from SBCC then and now Flickr