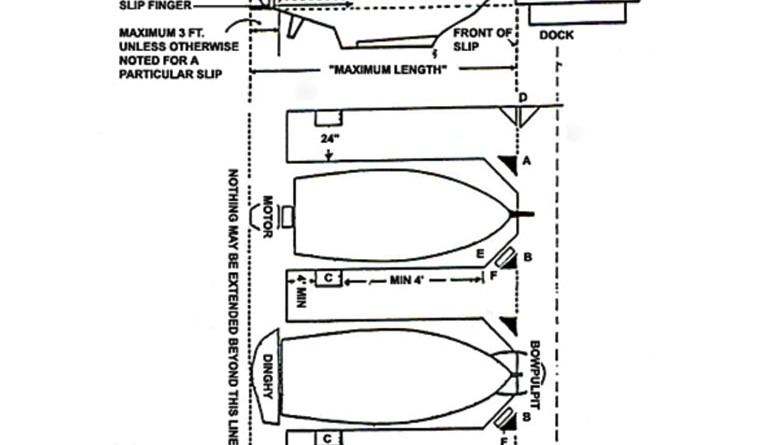 Your vessel’s bowsprit or overhang could become an issue when trying to fit into a slip.

SOUTHERN CALIFORNIA — You just bought a 38-foot boat and cannot wait to get your prized belonging into a slip (and later onto the water). After the transaction is complete you find the perfect marina to park your boat.

Imagine showing up to your home marina and finding out your assigned slip might not be the right size for your vessel (even if it’s designed to house a 38-footer).

How could a 38-foot vessel, with about 3 feet of overhang, not snuggly fit into a 35-foot slip? Perhaps how boats are measured vary from marina to marina. Such was the case in Santa Barbara, where a boater questioned the method of measuring recreational boat dimensions for slip assignments.

The topic of boat measurements, for the sake of slip assignments, was broached at a Santa Barbara Harbor Commission meeting in July. A local boater and the harbormaster struggled to properly fit a 38-foot vessel into a 35-foot slip.

Santa Barbara has specific requirements of how a vessel is measured and the way it fits within a slip.

For example all vessels in Santa Barbara Harbor are required to occupy at least 80 percent of its slip size. (Select vessels at the harbor’s fish floats are exempted.)

“The city of Santa Barbara has reviewed the navigational conditions within Santa Barbara Harbor and determined that the adoption of policies regarding vessel measurement and size restrictions is in the public statement,” a resolution approved by the Harbor Commission stated. “All boats must be secured so that no part, including bowsprit, boom, bumpkin or equipment will block or overhang any portion of a walkway.”

Both Cody and the Harbor Commission agreed the city’s boat measurement technique isn’t perfect and could be improved.

Allowable overhang somewhat varies outside of Santa Barbara. Harbors in Oceanside and Dana Point, for example, allow boaters to have 3 feet of overhang. However the overhang length for boaters at Long Beach’s three marinas is 4 feet and 11 inches.

Whether 3-foot overhangs are permitted at marinas in Ventura is at the discretion of the marina operator, according to Ventura West Marina General Manager Chuck Ormson.

“Our Master Lease limits [overhang] to 3 feet, but each marina operator decides what they will allow within that maximum requirement,” said Ormson. “We allow overhang depending on the width of the fairway behind the slip. Narrow fairways will not [accommodate for] 3-foot overhang, but the wide fairways might.”

Ormson added 3-foot overhangs are not permitted on the headwalk.

“We measure tip-to-tip which includes all appendages hanging off the hull, like swim steps, davits (with or without dinghies), anchor pulpits, bow pulpits and the like. Also we charge by the foot based on the greater of slip length or tip-to-tip vessel length,” said Ormson. “Overhang is not allowed on the headwalk and limited to whatever the local jurisdiction will allow behind the slip.”

Boaters do not have to deal with narrow fairways at these (and other) marinas.

California’s Division of Boating and Waterways outlines how marinas should be designed to allow for vessels with overhang.

For example the width of any given fairway should be 1.75 times larger than the longest berth perpendicular to the fairway.

“If boats longer than the berths will be allowed to overhang into the fairway, [the longest perpendicular berth] should be considered to be the length of the boats,” states the DBW policy.

The state’s marina design requirements are available on DBW’s website at dbw.ca.gov/TechDocs/MarinaGuide.aspx.

Bottom line: even with standard procedures in place be sure to double check with your local marina operator about whether you vessel will fit into the right-sized slip. Otherwise you might end up having to alter your vessel or pay more money for a larger slip.

3 thoughts on “The inexact science of measuring your boat”