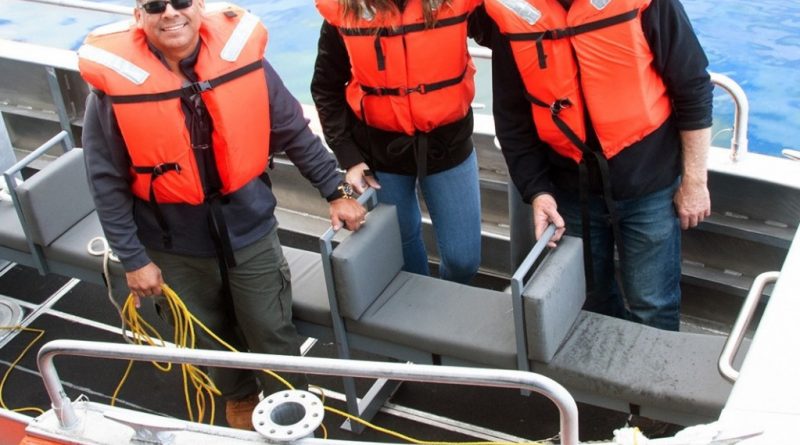 Boater U aims to provide professional education for recreational boaters of every level from the most novice to experienced seeking specialized skills.

SAN DIEGO—Boat sales have skyrocketed since the start of the Coronavirus, meaning more people have been stepping to helm for the first time ever or for the first time in a long time. Even before that, Training Resources Limited Maritime Institute (TRLMI) CEO Dave Abrams said he noticed a gap in the availability of professional education for recreational boaters, particularly for power boats. TRLMI, a west coast leader in education for professional mariners, began developing a school of sorts for recreational boaters six months ago and officially launched “Boater U” in August.

“I sought out to develop a program that would really be a professional education program for boaters, a school for boaters,” said Abrams.

Abrams said while it’s structured like a community college course, it’s also meant to be fun.

“It’s got to be fun, it’s got to be engaging, it’s like edutainment; it’s education but it’s entertainment,” Abrams said.

Boater U provides classes for complete beginners who may never have stepped foot on a boat and for seasoned sailors looking to enhance skills in areas like maintenance and repairs. All of the classes are held in the evenings and on weekends to accommodate recreational mariners’ schedules.

The courses aim to provide the same level of education TRLMI provides to professional mariners but to recreational users.

“I saw what we were doing in professional training for commercial mariners, I saw a lot of the elements that were needed for boaters,” Abrams said. “So I wanted to find a way to take some of the course material we have and not dumb it down but shrink it down to be able to fit into bit sized pieces that would work for the boaters.”

The launch includes two new courses, Boater 101 and Boater 102, to help novice boaters learn everything they need to know to be safe on the water, from rules of the road to maneuvering and docking in a marina.

Both courses are geared toward power boats. The Boater 101 course is a “Shore School” course which provides a thorough overview of boating including type of boats and propulsion; safety equipment and practices; trailering; boat handling; rules of the road and navigational aids; navigation; knots and lines; weather; and communications.

The course includes a state of California exam for the California Boater Safety Card.

Boater 102 is an on-the-water training course limited to five students per session. It teaches the basic skills of power boat operations including: pre-underway inspections; engine controls; maneuvering and docking in a marina; open water operations, low and high speed; man overboard retrieval; and handling in wind and waves.

The course is taught using the National Safe Boating Council Curriculum and is NASBLA approved. Upon completion, students receive a course certificate, which in many cases can be used to get a discount on boater’s insurance.

All of the courses are taught by US Coast Guard Captains and each course has a curriculum and syllabus. TRLMI’s facilities also include a bridge simulator, which Abrams said could be used in some of these courses.

Abrams said when he took over in 2018, he wanted to fill a gap he said he noticed in quality training for the recreational boating community.

“I’m a boater and have been a boater all my life and had always sought out educational opportunities to become a better boater,” Abrams said.

TRLMI began a boater education series about a year and a half ago, which started with three course offerings: diesel engine maintenance, outboard engine maintenance and marine electrical systems. Abrams said they had a great response to the courses but were also getting requests for a more novice class.

“We were still getting phone calls from people that said I don’t know anything about boating; I’m not ready to learn about how to work on a diesel engine when I don’t even know how to drive a boat yet,” Abrams said.

That led Abrams to develop the beginner boating program. He said they will also be adding more courses later this year and next year including marine weather; navigation and piloting; rules of the road; and a celestial course. He said they will design additional curriculum based on the boating community feedback.

“And listen to the boating community, where do they want education?” Abrams said.

For more information or to register visit boateru.com or stop by the TRLMI office at 3980 Sherman St., Suite 100, San Diego.