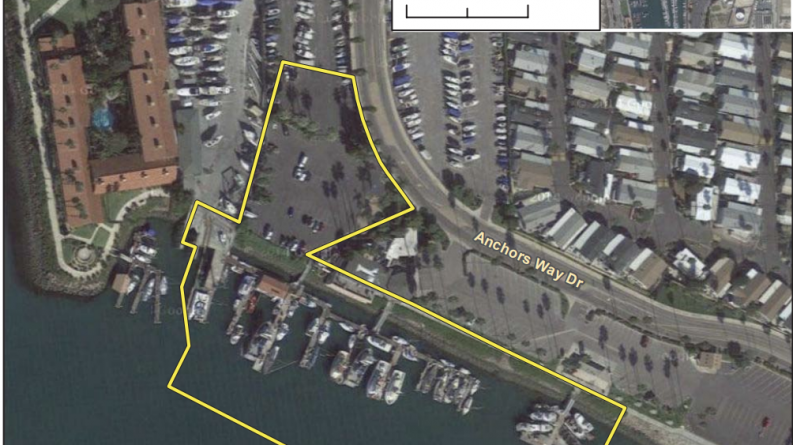 Ventura Harbor Marine Associates has submitted a request to sell the remaining leasehold of Parcel 20 to Derecktor Marine Holding, which plans to expand and improve the marina and boatyard.

VENTURA—Plans have been set in motion for a new leaseholder to take over Ventura’s Parcel 20 and for redevelopment on the site. The Ventura Board of Port Commissioners received an informational report about the buyer and potential future development for Parcel 20 at a special meeting on Aug. 19.

Ventura Harbor Marine Associates, LLC (VHMA) is the current master lease holder for Parcel 20, which includes a sublease with Ventura Harbor Marina and Yacht Yard (VHMYY). VHMA has submitted a formal request to the District to sell the remaining leasehold to Derecktor Marine Holdings (DMH). DMH is also seeking a 50-year lease option, which is being reviewed by the Port District.

DMH has also communicated a goal of implementing a new development plan for Parcel 20, based in part on the VHMYY Expansion Project, a plan submitted by VHMA and approved by the Board in November 2015.

“To date we’ve spent well over $5 million in this process and at the present time because of the time taken here, it’s just not possible for us to continue,” said Ventura Harbor Marine Associates CEO Samuel Sadove, who has held the lease for VHMYY since 2011.

Tom Derecktor and Leonora Valvo are heading up DMH’s plans for Ventura Derecktor. Derecktor and Valvo said they have been reviewing the VHMYY Expansion project to determine what changes may be appropriate and mutually beneficial for DMH and the District.

A revised VHMYY Expansion project or updated development plan will need project approvals from the District and other regulatory bodies including but not limited to the California Coastal Commission.

Derecktor and Valvo provided some background on Derecktor Shipyards and their potential plans for Parcel 20 at the Aug. 19 meeting.

“We decided that rather than retiring and sailing around the world, which was an option,  we really preferred the idea of digging in and working together on something that we both felt passionate about so that’s sort of how we got here,” Valvo said at the meeting.

Derecktor Shipyards was founded in 1947 in Mamaroneck, New York and the company currently has four yards on the East Coast.

Other plans include redesigning the marina to maximize flexibility in vessel type and size; expanding the fuel dock and bait on purpose built docks to support sportfishing; and creating a separate area for sportfish and small commercial vessels.

“It was exciting to see what you have planned for Parcel 20,” said Commissioner Mike Blumenberg.

The presentation was just informational; no board action was taken.

Ventura Derecktor hopes to have the assignment of the current master lease with the 50 year option in place with the District by Oct. 31. From there, they aim to have plans for expansion approved by the Port, Coastal Commission and city by April 2024 and have the upgrade complete by December 2026.