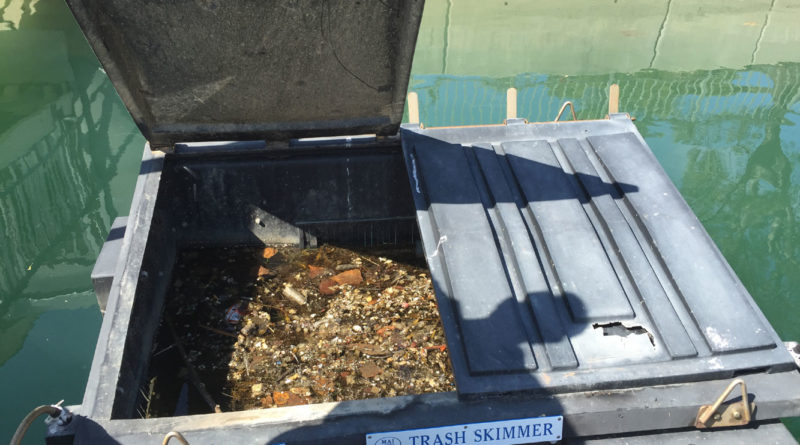 DANA POINT — It looks like a half-sunken heavy duty garbage bin to the untrained eye, however, the trash skimmers installed at the edges of docks and on the water’s surface at a handful of marinas in Southern California are more than trash receptacles. They are quietly collecting debris and sucking in oil sheen from the water’s surface to help keep the water as clean as possible.

There are six of these trash skimmers spaced out across Dana Point Harbor. Inside these submerged aquatic bins is a combination of water, Styrofoam waste, trash and dead marine plants.

Brad Gross, Dana Point Harbor’s manager, tested a trash skimmer at the county-owned marina in 2009. Two years later, Gross successfully applied for a grant to pay for five more trash skimmers to be installed at the marina and another at Sunset Harbor in Huntington Harbour. Dana Point Harbor was granted $100,000 by the Orange County Transportation Authority in 2011 to install five new trash skimmers.

Four years later, Gross said the harbor has benefitted from the trash skimmers.

One of these trash skimmers was observed by The Log’s reporter on May 27. From the outside, the trash skimmer resembled a large trash bin submerged into the water. Lifting up one of the two lids, Gross showed The Log what was collected by the trash skimmer closest to the Harbor Department office: a few cigarette butts, broken Styrofoam, kelp, seaweed and a couple of soda cans were floating inside.

“It’s basically like a big pool pump,” Gross said, adding the six skimmers collect nearly 45,000 pounds of debris annually. “Mostly what we see is seaweed, kelp … just the stuff that’s kind of floating on the surface. It’s a minor pump; it’s not like an intake for one of the power plants.”

The trash skimmers are monitored and emptied daily by the harbor’s grounds crew. Gross said the trash skimmers only collect discarded trash and loose plant life; the machine’s suction is not powerful enough to suck fish into the banister.

Gross added the trash skimmers are strategically placed along the northern end of the harbor, as the prevailing winds in Dana Point and the venue’s overall design causes most debris to accumulate in one general area.

A report published by the Port of San Diego in 2011 confirmed the strategic placement of trash skimmers qualifies as a best management practice.

“Due to the general construction of marinas and prevailing winds there is usually an area within each marina where floating trash and debris naturally collects,” the report, which was submitted to port officials by AMEC Earth and Environmental, stated.

The report also described the trash skimmers as a machine “quietly” operating 24 hours a day and collecting “unsightly floating debris, plastic and organic matter” while also “improving the water quality throughout the marina by providing a continuous mixing of the normally low flowing water.”

Oil sheen waste is absorbed by the trash skimmer if an absorbent bilge pad is installed.

According to Gross and the Port of San Diego’s 2011 report, the trash skimmers are most active during winter months.

Trash skimmers are also being used in San Diego Bay, at waterfront venues such as Pier 32 Marina in National City and Point Loma Marina in San Diego. The skimmers at both marinas, which are owned by the same group, are advertised as a “Clean Machine” collecting bottles, cardboard, oil sheen, plastic bags, Styrofoam cups and wood.

Four marinas participated in the port’s report in 2011: Pier 32 Marina, Point Loma Marina, Half Moon Marina and Cabrillo Isle Marina. Port officials said they were unable to gather enough quantitative data to demonstrate the trash skimmer’s impact on water quality due to equipment malfunction. However, the report stated the trash skimmer program at the four marinas proved to be successful.

The report continued there was a noticeable difference in how much debris no longer existed in the water.

“Regardless of the lack of quantitative data this program is deemed a success because of the sheer volume of debris removed from the marina water, the increased observable clarity of the water and the satisfaction of the marinas and their tenants has shown that the marine trash skimmers have been a valuable asset for each marina,” the report stated. “Each marina manager has indicated how satisfied they are with their skimmer. Not only do they improve the aesthetics of their marina but the skimmers are easy to use, silent, and save the marina time and money by reducing the marina staff’s workload.”