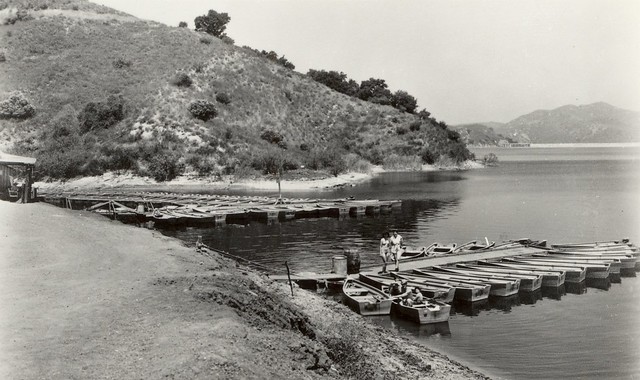 SANTIAGO CANYON—Irvine Lake was once a popular recreational fishing hideaway in Orange County. Pictured here, folks can be seen using the rental boats in the 1940s, which at one time was a draw to the area.

Parimal M. Rohit has covered Irvine Lake’s closing in February 2016, comparing it to the plight of Lake Elsinore, which was once an inland playground for Hollywood celebrities.

Rohit wrote, Freshwater anglers used to frequent Irvine Lake for the opportunity to catch catfish, crappies, largemouth bass and trout. … Also caught at Irvine Lake in its final days as a fishing destination was an 80-pound sturgeon. The lake’s water levels were reaching alarming low levels in 2016, which, in light of the recent streak of rainy days in Southern California, begs the question: What is Irvine Lake’s current water levels and could its days as a recreational boating and fishing destination be revived?”

Irvine Lake will reopen to shoreline fishing only on Aug. 17, but County officials have been criticized for not maintaining this once beloved area.