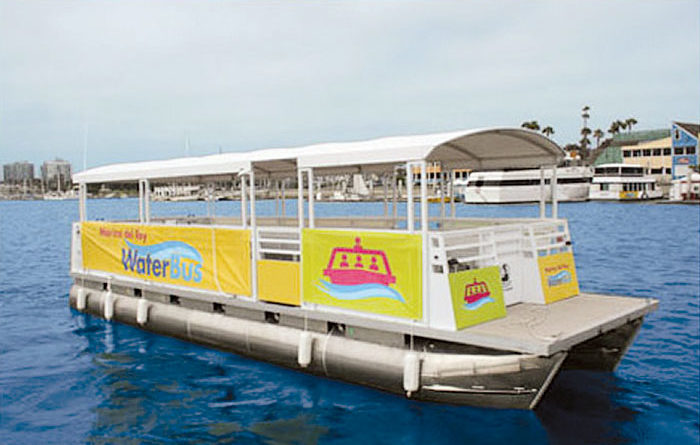 WaterBus service has maintained a presence in Marina del Rey, operating each summer in the harbor; those using the service do so by catching the WaterBus at one of nine designated boarding locations.

“By providing direct access to the water, as well as itself being a water activity, the program continues to attract visitors and encourage leisurely weekend use of the Marina as a tourist destination, thereby increasing patronage of retail restaurants and other establishments, resulting in additional revenue to the county,” county staff stated in a report to supervisors.

“In addition, the WaterBus service provides an alternative form of transportation for residents in the Marina, including providing bicyclists with access to the Marvin Braude Bike Trail (coastal bike path) and alleviating traffic in the Marina during the popular Burton Chace Park summer concert series and other special events,” county staff continued.

The waterbus service is expected to run 11 weeks during the first year of the contract, according to county staff. Service will increase slightly to 12 weeks next year.

WaterBus began offering shuttle services on the water in 2002; the service, according to county staff, “has steadily increased in popularity, serving a record 58,000 passengers in the 2018 season.”

“To accommodate the increase in ridership, the service will be expanded in the requested contract, which has increased the annual contract amount by $394,804 over the current contract,” county staff stated in it’s report to supervisors. “Each year of the contract, the WaterBus service will operate for a special two-day Department event in May, and then regular service will begin on the third Thursday in June, continuing through Labor Day.

Hornblower’s previous contract with the county took effect in 2014 and expired on May 6.

WaterBus service is offered Thursdays through Saturdays, 11:00 a.m. to midnight, and Sundays, 11 a.m. to 9 p.m. The service runs from 11 a.m.to 9 p.m. on Labor Day and 11 a.m. to midnight on the Fourth of July, MarinaFest, ARTsea and Discover Marina del Rey.

The total contract will be worth $4,437,898, if all five years of the approved contract are executed.

“The director of the Department of Beaches and Harbors [has the authority] to exercise the two one-year optional renewal years, if, in his opinion, Hornblower Yachts, LLC has effectively performed the services during the previous contract period and the services are still required,” county staff stated in their report to supervisors.