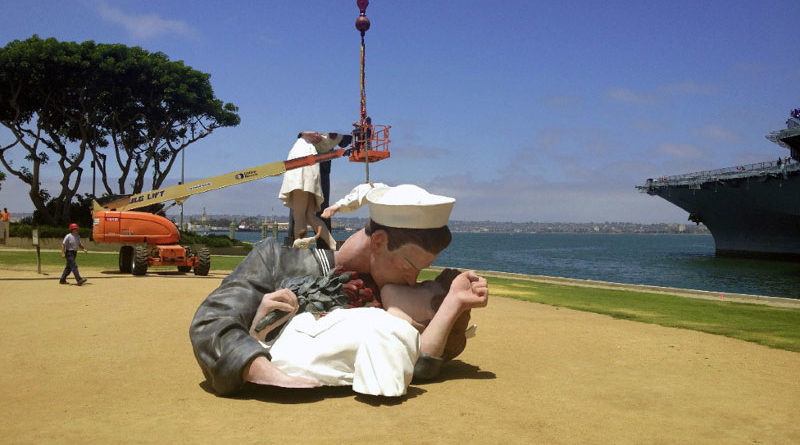 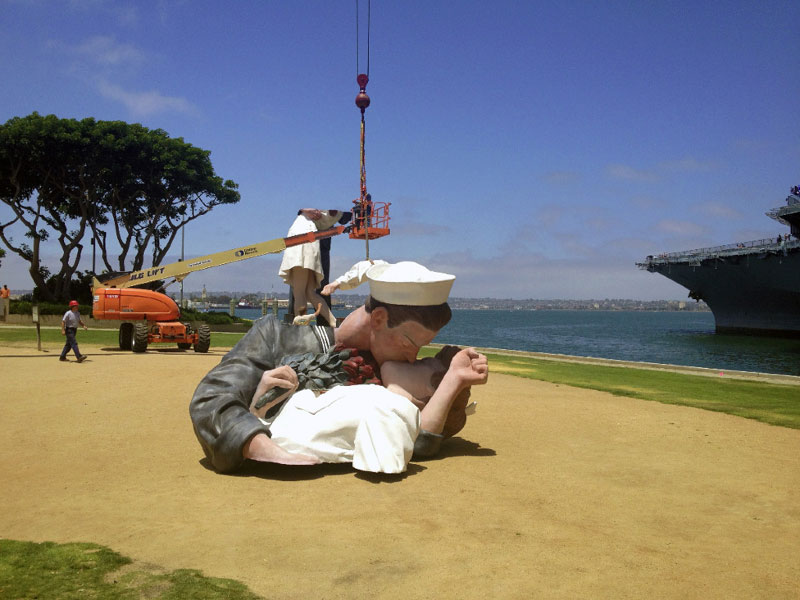 SAN DIEGO — San Diego Bay’s 25-foot-tall sculpture designed to replicate the famous photo of a sailor kissing a nurse while celebrating the end of World War II is being removed, to make way for a permanent version of the commemorative piece.

The temporary urethane statue will be replaced with a permanent bronze version, made possible by the $1 million raised by the USS Midway Museum through its “save the kiss” fundraiser.

The replacement is planned to be installed by the end of the year at the Port of San Diego’s Greatest Generation Walk along the downtown waterfront, south of the USS Midway aircraft carrier.

“This is a day in which all of San Diego can take a great deal of pride,” said USS Midway Museum president Mac McLaughlin. “San Diegans have made it clear they cherish not only San Diego’s military heritage, but all the men and women who serve our nation in uniform.”

The statue, titled “Unconditional Surrender,” was created by artist J. Seward Johnson and was first loaned to the Port of San Diego in 2007 for one year. The loan has since been extended a number of times, with the statue’s removal finally coming May 30, following the San Diego Board of Port Commissioners’ decision in March to accept USS Midway Museum’s offer to donate a bronze version of the sculpture to the Port of San Diego.

A crew from the artist J. Steward Johnson’s studio in Hamilton, N.J., is in charge of removing the statue. The team used a crane and a lift to remove the 3-ton sculpture and its 12-ton steel base. Two flatbed truck trailers will transport the sculpture from San Diego back to New Jersey, where it will be restored.

USS Midway Museum is planning a community celebration after the permanent statue is installed.