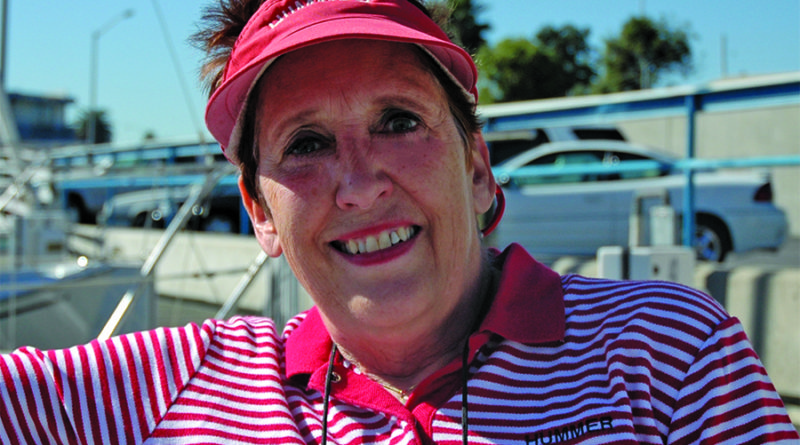 Gail Hine created a convention 30 years ago to educate and promote women interested in sailing; the annual convention has now had decades of success.

CORONA DEL MAR—A 30-something-year-old Gail Hine didn’t mind being one of only a few women in a room full of men in the 1970s and 80s. They taught her how to sail after all and she wanted to learn from them. In her spare time in the early 80s, Gail Hine could be found at the helm of Hummer, a 24-foot Nightingale sailboat. When she was on the water, she wasn’t cruising, she was racing. The role required an unwavering concentration; finding the sweet spot with the wind could be the difference between second and first place.

Fast forward several decades to 2020 and Hine is still at the helm, but no longer of a boat, instead a 30-year-old successful convention, now called Sailing Convention for Women.

“It’s been a nice community to spend my recreational life in and some of my professional life,” said Hine.

Hine, who was the first woman to attain a number of positions and awards in the Southern California yachting community, is as humble as they come. She was the first woman to serve as Southern California Yachting Association director, commodore of Redondo Beach Yacht Club (1980-81) and president of Recreational Boaters of California (1994). She was the first woman recipient of the ‘Peggy Slater Award’ in 1990, Women’s Sailing Association’s ‘Marilyn Butefish Award,’ SCYA’s ‘Warren Ewert Trophy,’ Association of Santa Monica Bay Yacht Clubs’ ‘Yachtsman of the Year,’ the Pacific Coast Yachting Association’s ‘Charles A. Langlais Trophy,’ SCYA’s 1998 ‘James Webster Trophy’ for outstanding contributions to the yachting community, and BCYC’s Newport Yachtsman of the Year in 1998 and 2002.

“I’m a Capricorn,” said Hine laughing, alluding to the characteristics of the zodiac sign, of which ambitious tops the list. “It’s my personality.”

Hine has been a leading force in promoting women’s sailing in Southern California for more than four decades. She has held various volunteer positions, including serving 27 years on the Board of Directors of Recreational Boaters of California (1981-2008), advocating for boater-related issues to state and local governments.

She grew up in suburban Illinois where she occasionally went sailing with her father and participated in a local league in high school. It wasn’t until 1968, when she moved to Southern California with her husband, that her involvement in sailing really bloomed.

“We were living Redondo Beach and I said well I used to sail,” said Hine. “Maybe we should look into sailing.”

The couple bought a small boat and joined Palos Verdes Yacht Club, which is now Redondo Beach Yacht Club, as a way to plug into their new community. The decision was a recreational one; as Hine continued working as a graphic designer, later going on to build her own business, Teamway Marketing and Design. Hine learned how to sail and quickly learned she preferred racing to simply cruising; she would later go on to win the Marina del Rey to San Diego race in 1984.

“I like excitement of making the turns and interacting with the other boats,” said Hine.

Hine was finding her stride in her new community in the late 70s and wondered why there weren’t more women involved.

“I was at Redondo Beach Yacht Club and there were hardly any women out there doing this and I said where are all the other women?”

Hine began organizing a series of seminars at the yacht club for women.

“I just started on my own with the boys at the club, let’s get some women to go sailing,” said Hine. “I said if you teach it and work on the mechanics of it, I’ll organize it.”

The seminars started in 1975 and took off from there.

“It was super successful,” said Hine. “I started with three, went to four, went to five, went to six.”

Hine was eventually asked by SCYA to chair a women’s sailing committee for the Southern California boating community and she quickly got to work gathering women, crafting goals and starting a newsletter. It was in organizing this committee that Hine got the idea to start a convention, with the first event held in 1990. SCYA sponsored the event for the first 27 years. Current Women’s Sailing Convention Co-Chair Kathie Arnold, who had been sailing since she was 16-years-old, learned about the convention through the newsletter in 1991.

“I was getting her newsletter and I thought I’ve got to meet this gal, I’ve just got to meet her,” said Arnold.

It took only one convention for Arnold to get involved. She taught workshops for many years and has served as the second in command since 1992.

Arnold boasts quite a resume herself. She lived on a 36-foot sailboat in the Mediterranean, crossed the Atlantic, spent eight months in West Indies and Caribbean and a year in Florida. She held a U.S. Coast Guard Master Captain’s License for many years, worked as a Charter Captain and taught at OCC Sailing Center for Seamanship in Newport Beach. She won Southern California Yachting Association’s Peggy Slater Award in 2000 and the National Women’s Sailing Association/Boat US Leadership in Women’s Sailing Award in 2016.

From women who have sailed the world to successful racers and fellow women sailing advocates, the convention draws about two dozen instructors from multiple states, all who also boast impressive experience, with about 40 percent holding a U.S. Coast Guard Master Captain’s License. The event also attracts attendees from around the U.S. Other organizations from around the country have even used the event as a model to create their own.

“Since she did this, other states started their own conventions,” said Arnold. “Look at what she started.”

“This event has spawned four or five other events,” said Hine.

Hine said a workshop crafted for the convention has even inspired a U.S. Coast Guard Auxiliary course. The “Suddenly Single-Handed” workshop at the Sailing Convention for Women puts participants in a scenario where they are on their way to Catalina Island when the other person onboard with them falls down the companionway and breaks an arm. The workshop teaches participants what they should do.

Similarly, the USCG offers a “Suddenly In Command” class, which teaches participants what to do in case of an emergency, such as the captain falling overboard.

This year’s Sailing Convention for Women will be held on Feb. 1. Registration costs $235 and is limited to approximately 240 attendees; it is expected to sellout. More information on the convention can be found online at sailingconventionforwomen.com/. Organizations such as the Women’s Sailing Association also provide year-round resources for women interested in sailing.

Hine remains deeply involved in the administrative side of sailing – serving as the Director of the National Women’s Sailing Association / Women’s Sailing Foundation and member of WSA-OC – and still runs her graphic design business in Murrieta.