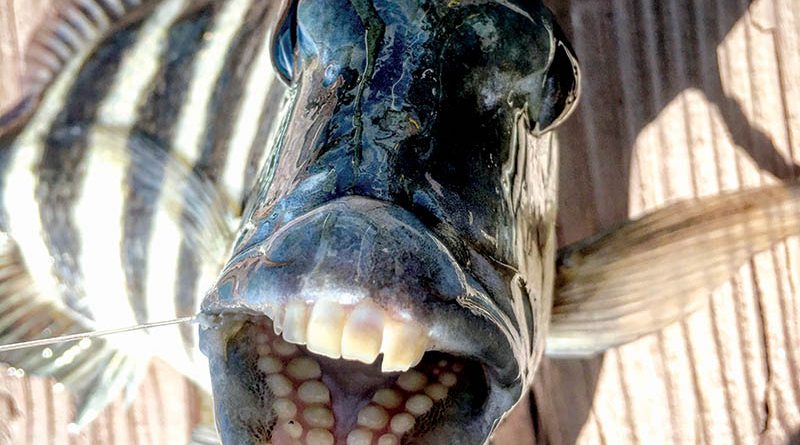 The unique structure of the sheepshead fish’s teeth is a distracting feature, but local angler is excited about that capture of this nine-pound fish.

A smile worth writing about was found by an angler in August 2021, off Jenette’s Pier in North Carolina.

The angler had a bizarre fish with a mouth full of what looked like human teeth hooked on their line.

The creature looks like a normal fish at first glance, but once it opens its mouth, the sheepshead fish looks like a cartoon version of a basic fish. The fish is a common resident of the Atlantic Ocean, yet still sparked conversations when photos of the catch were shared on Facebook.

The nine-pound sheepshead fish most likely gets its name from sharing similar dental features with sheep. It uses its impressive dentition to crack open clams, oysters, and other crustaceans.

The toothy fish was reeled in by Nathan Martin, a frequent fisher at the pier.

Martin was using sand fleas as bait when he caught the sheepshead fish.

“It’s a very good fight when you’re fighting on the line, it’s a really good catch, and it tastes very good,” said Martin to McClatchy News. Martin also included that he plans to mount the fish in his home.

Photos of the fish were uploaded to Facebook on Aug. 3 and soon went viral as users commented with confusion after discovering the creature and its several rows of human-like teeth. The fish has a top row of teeth that resemble those of a human, followed by rows of shallow molars down the throat.

The fish is also sometimes referred to as the ‘convict fish’ because of the dark stripes that run down its light grey body, resembling the uniform that is worn in prison.

Although the mouth of the sheepshead fish is intimidating, the possibility of being bitten is slim. According to snopes.com, the fish “pose no threat to humans unless harassed.”

Because they are good to eat, the sheepshead fish is a common target for anglers. The capture of the fish does warrant the possibility of being bitten or poked by their sharp dorsal fin spines; however, they are still a desired catch.