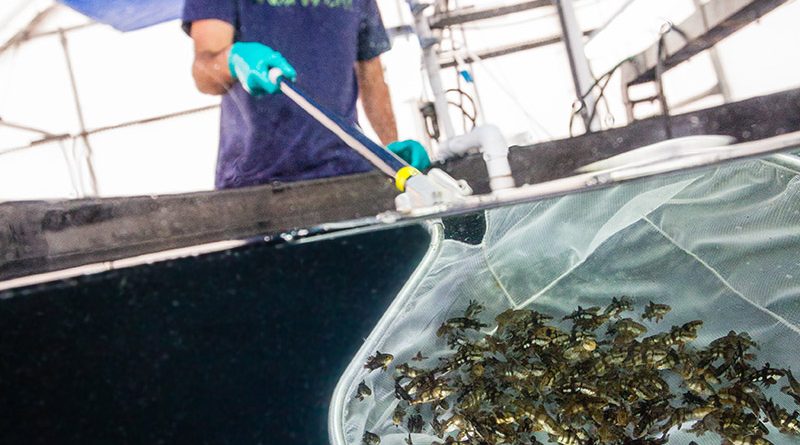 In 2017 a report by California Sea Grant commissioned by the California Department of Fish and Wildlife suggested that fish from the hatchery accounted for less than one percent of white sea bass in the fishery.

In the previous study, the fish were identified as hatchery fish using a coded wire tag implanted in the fish’s cheek. In the recent study, a research team used genetic fingerprinting rather than the traditional tagging method to test the control groups.

“It has stimulated an incredible amount of interest and excitement because we’ve been looking at coded wire tag information for years as we surveyed the different landings and markets for adult fish,” said Mark Drawbridge, senior research scientist at Hubbs SeaWorld Research Institute. “[The] return rate has been low, and I want to say about 1 in every 100 fish on average. So that is less than one percent, so obviously, that has been discouraging for everyone involved in the program, and we have been trying to figure out different ways to improve that and fix that and certainly get it up into the several percent… And now looking at these new numbers, this new tagging technology it has kind of turned things upside down the potential in the overall efficacy of the program, so it is incredibly exciting in that regard.”

The study is a collaborative effort with the South Carolina Department of Natural Resources, which also runs a stocking, enhancement, and replenishing program with several different marine fish on the East Coast.

The research team uses a genetic marking process on twelve different marine fish species throughout five different states to track the success of their fisheries; traditionally, fisheries use other measures like the coded wire tag used by the OREHP on the white sea bass.

Drawbridge happened to know the people in the South Carolina study and reached out to them to see if they would be interested in working with OREHP.

“It’s a project we initiated about four years ago, so it’s been a while in the making, and it is a complicated project, so it has taken a while just to get these preliminary results,” said Drawbridge. “So, basically, I have some connections on the East Coast. The group that we worked with on this project, that was instrumental, is a research team from [the] South Carolina Department of Natural Resources.”

To start the project, Drawbridge and his team sent almost 600 genetic samples they had archived from the original broodfish in 1995. Then, the South Carolina team genotyped the fish and essentially created a fingerprint for each adult fish.

“With the resolution of those fingerprints when we send them a sample from a white sea bass collected out in the ocean…,” said Drawbridge. “All you need is a clip from the fin, and we can send it to them, and they can tell us if it came from the hatchery. And specifically, from the breeding fish, they were able to genotype.”

SCDNR has worked with the genetic-marker methodology for over 20 years and has achieved a 99.99 percent confidence level to distinguish between hatchery-reared and wild fish in this study.

There were 713 juvenile fish sent to South Carolina, and they were successfully able to genotype 597 fish. Out of those fish, 276 fish were reported to have come from the hatchery. This makes a 46.2 percent return rate. However, when the fish were captured, they were also scanned for the coded wire tag, which only 7.4 percent of the fish had.

There were 50 adult-sized fish sent to South Carolina; of those, 43 were successfully genotyped, and 13 had a genetic hatchery signature meaning 30 percent of the sample group were viable in Southern California hatcheries.

“Based on those numbers, a lot more hatchery fish swimming around in the ocean than those coded wire tags would lead you to believe,” said Drawbridge.

Drawbridge said there is more to come to analyze the contribution of hatcheries, and the next steps are uncovering the mystery of the coded wire tags.