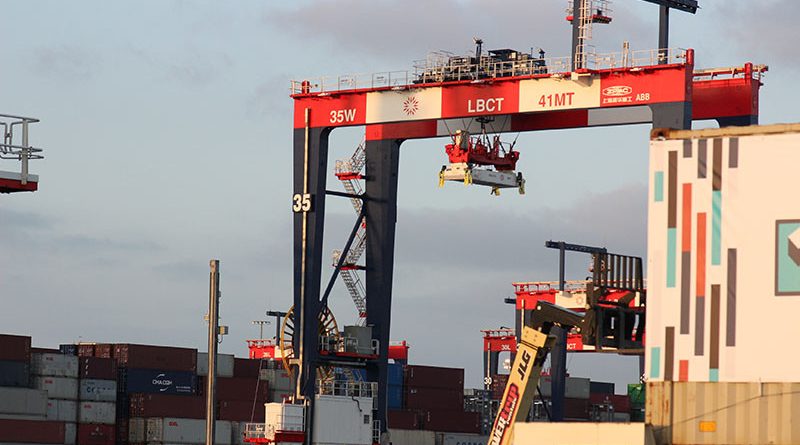 Construction of the container terminal was broken into three phases and took almost ten years to complete.

LONG BEACH— Construction of the Long Beach Container Terminal at Middle Harbor was completed in June of this year and the port celebrated with a cocktail party right on the pier on Aug. 20.

The party was attended by port employees, commissioners, and other government representatives to celebrate the decade-long project for a greener port.

The $1.493 billion project was a three-phase project that began construction in May 2011, with the first phase, completed in April 2016 that created 151 acres that allowed the terminal operator to begin operation, the next two phases filled in the final 149 acres for a total of 300, and added a completed container yard, on-dock rail yard, terminal administration building, and a 4,200-foot wharf.

Long Beach Harbor is considered America’s sixth busiest port and the new terminal has an annual capacity of 3.3 million containers, the new terminal is also equipped with nearly all-electric and zero-emission equipment making it one of the greenest seaport operations in the world.

“As Federal Port Commissioner, I get to go to all the ports in the United States but I also get to go to all the ports overseas where we have bilateral agreements,” said Louis. E Sola, commissioner of the Federal Maritime Commission. “So, after seeing Singapore seeing Hong Kong seeing Busan in Korea and asking well why can’t they do that here? Well, today they did that here. And I am very proud of the nation and I am proud of what Long Beach has done, this one they said in a lot of different ways but this port moves as many containers as the entire state of Texas so I hope that kind of puts that into perspective. But it is a very happy day for me.”

The new equipment includes an on-dock rail yard that is designed to handle 1.1 million containers annually and was built to minimize truck traffic on the local roads and freeways. The new operations are part of the Port’s Green Port Policy and the San Pedro Bay Ports Clean Air Action Plan.

The new facility also boasts zero-emission yard equipment including guided vehicles and rail-mounted stacking crates, there is also an electrical substation and shore power that allows vessels to switch off diesel engines.

The additional cargo from the expansion has generated 14,000 permanent jobs in Southern California and the unionized labor at the terminal will operate the ship-to-shore cranes, staff the control center, and maintain technology.

“I think just as the director stated it means jobs it’s going to mean a clean environment it’s going to mean good movement not only for this area but for the state and for the nation,” said Senator Steven Bradford from the 35th District. “That’s why we’re are the fifth leading economy in the world because of facilities like the Long Beach Container. It is just amazing I have been out here multiple times in its infancy and now to see the Long Container Terminal completed it’s amazing I am excited about what it means not only to the region but to the nation as well.”

The final three acres of the project will be completed in 2025 with the opening of the North Gate Expansion that will push the terminal to 303 acres.