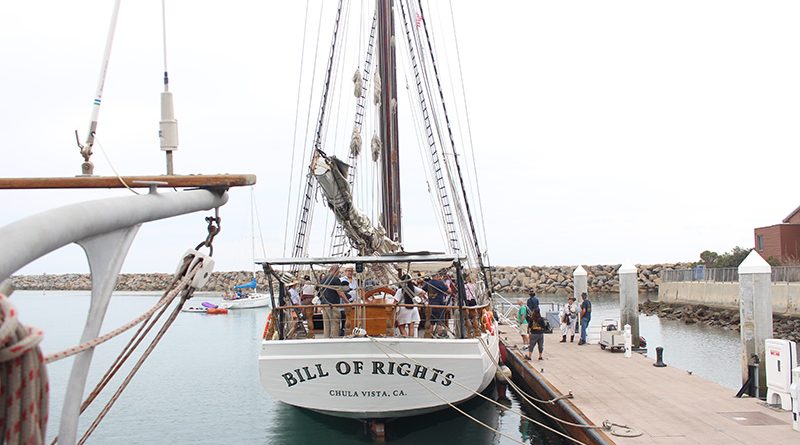 The Bill of Rights was the first tall ship to arrive, and guests toured the boat in waves all day. Katherine M. Clements image

The Tall Ships came to Dana Point for the annual maritime event, where guests experienced maritime history and had unique encounters with legendary mermaids, pirates, and live sea creatures.

DANA POINT— The Maritime Festival returned to Dana Point Sept. 9-11 for its 38th annual celebration of maritime history. The three-day event kicked off on Sept. 9 with the Sails N’ Ales event with a surprise light drizzle to cool off guests. The festival picked up again on the morning of Sept. 10 with a mermaid breakfast followed by an entire day of maritime activities that went through Sept. 11.

The Sails N’ Ales event was from 6-9 p.m., and guests got to take part in craft beer tastings from six different local breweries, including, Docent, Lost Winds, Dog Pawrk, Delahunt, Bottle Logic, Game Craft Brewing Company, and Batch Mead. Visiting pirates and peddlers marched the grounds looking to fill their steins with beer while listening to live music provided by The Trip. Sails N’ Ales also gave guests a prime viewing location of the visiting tall ships and the first arrival the Bill of Rights.

Saturday and Sunday started at 8:30 a.m. with a buffet-styled mermaid breakfast that lasted until 10 a.m., when the Maritime Festival officially opened. A general admission ticket to the festival got guests tours of the tall ships, which took place every 15 minutes, as well as access to Intertidal Touch Tanks, where guests of all ages got to touch and squirm at the feeling of underwater creatures. Young guests enjoyed activities like panning for gold, scrimshaw, morse code lessons, and an archeology dig.

Mermaids performed shows, and Cap’n Jack’s pirate school was in session from 2-3 p.m. One mermaid left the water for a bit to read tall tales to the children.

The Peddler’s Village was lined with visiting traffickers who set up camp behind baby beach and spent three days drinking, eating, and wandering the grounds before moving on to their next location.

“I think this setup is awesome,” said attendee Gary Kratzer.”…And the weather is adding to the ambiance. The smokey fires going while it drizzles; it’s awesome.”

A market was set up with local vendors selling handcrafted goods like clothing, soaps, and artwork, and right next door were food trucks of all varieties. The rain didn’t stop anyone from shopping and eating.

Saturday evening was the adult-only event, the Pirate and Mermaid Ball. The event included specialty libations and appetizers catered by new local restaurant Giana’s, games, and challenges where guests competed for booty. Live music welcomed the tall ships returning from their day on the water and their explosive cannon battles. Mermaids and pirates attended the event and dazzled guests while they enjoyed food and drinks. All proceeds from the Pirate and Mermaid ball benefited the Ocean Institute’s educational programs.

The annual Maritime Festival featured three tall ships that guests could board and tour: the 136-foot Bill of Rights, a schooner built in 1971 from Chula Vista designed around an 1856 America Cup Schooner; Irving Johnson, a 110-foot Brigantine came down from Los Angeles to join the cannon battles; and lastly, Exy Johnson, a 110-foot Brigantine, named the “Official Tall Ships Maritime Ambassadors of the City of Los Angeles,” who even had a pup on board, came down from Los Angeles to show off.

The ships displayed blasting cannons, towering rigging, and bustling decks for guests to see. The crew worked with participants to haul up sails and educated everyone about the ships.

The Ocean Institute was founded in 1977 as an ocean science center, maritime historical collection, and experiential education venue for visitors. The campus is home to a live lab with more than 1,100 species native to California’s coast and hosts events throughout the year to raise money to support the ongoing educational programs that benefit ocean research. The Institutes’ next event is the Fall Film Festival on Nov. 19.

For more information on the Maritime Festival, future events, and the Ocean Institute, visit https://oceaninstitute.org/.