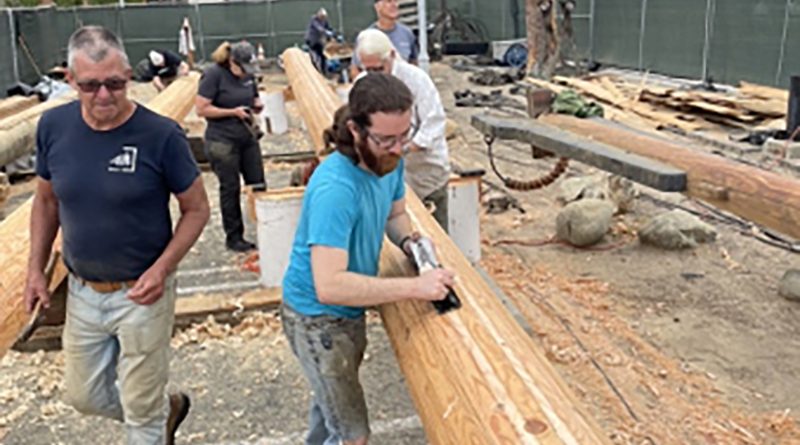 Worker shaping the new mast for The Spirt. Image courtesy of the Ocean Institute.

After bad news struck, the Ocean Institute’s tall ship, The Spirit of Dana Point, 30 days were given to complete the required repairs to maintain its insurance policy. Two months later, the tall ship has returned to its home in Dana Point, shiny and new.

DANA POINT— On Aug. 22, the Ocean Institute in Dana Point announced the return of the tall ship, The Spirit of Dana Point. On Aug. 28, the Institute hosted a free event that presented her restoration journey and a coin ceremony to welcome her home. There was also a Q&A segment for those who had questions regarding the process.

“A coin ceremony typically occurs with new construction, but we wanted to celebrate her restoration and welcome her home,” said Ocean Institute Communications Specialist Miranda Lentz. “A coin ceremony generally occurs at the keel laying, in the early stages of a ship’s construction. In it, the shipbuilders place one or two coins under the keel block of the new ship to bless the ship and as a symbol of good fortune.”

Captain John Kraus was present to speak about tools used, artifacts collected throughout the process, and the restoration project in its entirety. Kraus has a history with the ship and has spent many hours on other local tall ships and was approached to spearhead the restoration efforts because of his experience. While in San Diego (where the tall ship was restored), Kraus and crew replaced her rigging and masts on-campus. New masts were found in the Pacific Northwest and were shipped to Ocean Institute in March to be shaped and outfitted with The Spirit’s rigging. Kraus and workers from the shipyard rebuilt and restored deadeyes, the masts were replaced entirely, and shaped onsite, new fife rails were built, and the rigging was replaced and restored.

“Her keel was laid in 1970, making her roughly 52 years old,” said Lentz. “These repairs were necessary because her decking needed work. In addition, her maintenance schedule dictated these treatments for routine maintenance.”

The restoration project was announced in March after the Institute faced complications when its insurance insisted that it accelerate its Coast Guard-approved restoration plan for The Spirit, which had to include replacing the decks. The project cost $1 million in total. The Institute’s project plan was Coast Guard approved and slated to complete the project by December 2022. However, after beginning to explore options for the project, the Institute received a 30-day notice.

To uphold its insurance policy, the Institute was told it needed to make the costly renovations within 30 days, work it had expected to have until December 2022 to complete. Without insurance, the ship could not stay docked in Dana Point Harbor.

After the hit it took from having to shut down during the pandemic, the Ocean Institute didn’t have the $1 million it would need to complete the repairs to its 98-foot-tall mast and decking the Coast Guard said would need to be made over time. Still, the insurance company said it needed to be completed right then.

Large donors helped get the fundraising rolling, and after institute officials requested the public, more donations flooded in.

The Spirit of Dana Point is a traditionally built replica of a 1770s privateer schooner used during the American Revolution. These ships were known for their speed and were used for smuggling. The vessel is 118 feet long with a rig height of 100 feet and 5,000 square feet of sail.

Dennis Holland, a master shipwright who built the 118-foot seafaring vessel, had a dream to construct an accurate replica from the period when America fought for independence. So, armed with talent, determination, little money, and plans he purchased from the Smithsonian Institution, Holland laid the keel in his Orange County yard on May 2, 1970. Thirteen years later, this fast privateer was launched and continues to sail the ocean. The boat is decorated with craftsmanship and pride of early America from bow to stern.

Formerly the Pilgrim of Newport, the re-named Spirit of Dana Point is now a teaching platform where students directly experience life at sea as it has been for hundreds of years. The schooner is used for living history and at-sea maritime programs throughout the year.

The Spirit will be present at the upcoming Maritime Festival at the Ocean Institute from Sept. 9-11, but it has not yet been decided if she will be inviting guests onboard.

For more information on The Spirit of Dana Point and the Ocean Institute, please visit https://oceaninstitute.org/.