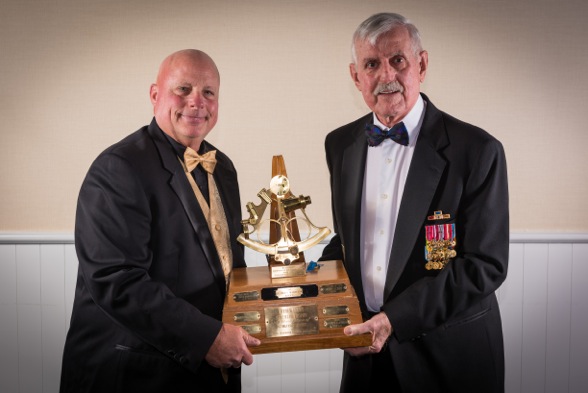 King Harbor YC Commodore Bob Duncan said, “These awards say a lot about our membership and about how they personify the Corinthian Spirit. It’s great to see our young sailors like Emma getting recognition as well as our experienced sailors like Jerry. This makes me very proud of our members.”

Martin received the Warren Ewert Memorial Trophy for distinguished service to the Southern California Yachting Association (SCYA). The trophy is awarded in recognition of any person who served the SCYA with distinction in the true Corinthian Spirit.

Born in Chicago, Illinois, Martin began sailing after he retired from the U.S. Army at the age of 40 as a criminal investigator. While in the Army, Martin didn’t really have time for a hobby. One day he was walking down Harbor Drive and stopped at the Catalina Boat broker and decided to buy a boat.

Martin has always believed in giving back to the sport.

“I have been a U.S. Sailing judge, Principal Race Officer and on top of all that, I spent 23 years in the Coast Guard Auxiliary and I was certified as an instructor and Boat Crewman,” Martin said.

Tallman is 12 years old and is in the seventh grade attending Calle Mayor Middle School in Torrance. She has sailed since the age of 7 with the King Harbor Youth Foundation and began sailing competitively when she was 9 years old in the Optimist Sailboat.

Tallman is a third generation sailor. Her grandparents Don and Joanne joined King Harbor YC in 1973 and her parents Craig and Renée also sail and are members of the club.

Upon being notified of her award, Tallman said, “I’m honored to be recognized and I look forward to the challenges moving forward to become one of the top junior sailors.”