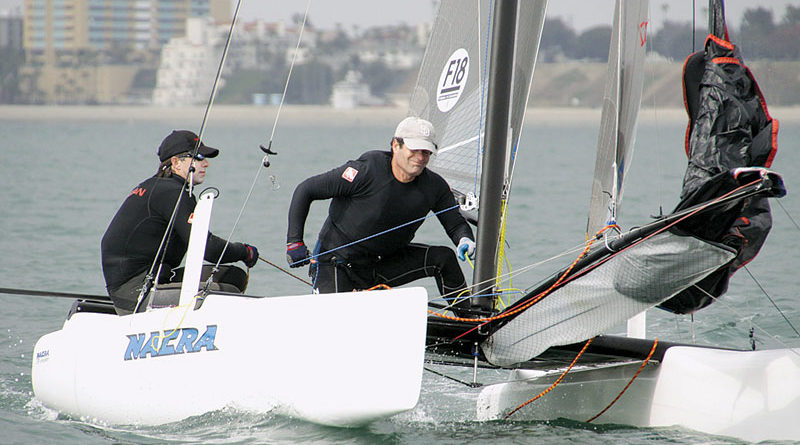 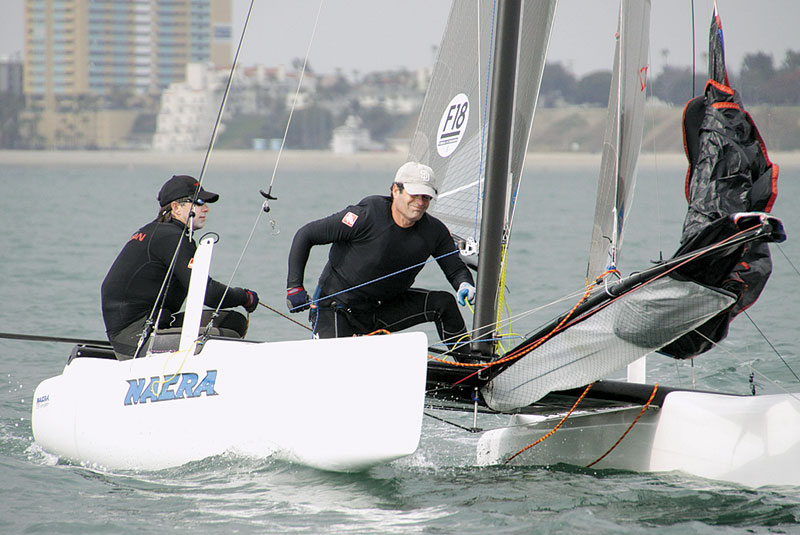 LONG BEACH — A few words of warning to Formula 18 catamaran racers who plan to be in Long Beach for the class world championships in September: Matt Struble and Damon LaCasella own these waters.

Or at least they did Feb. 18-19, during the 83rd Southern California Yachting Association Midwinter Regatta competition hosted by Alamitos Bay Yacht Club — one of 27 clubs hosting races in a total of 74 classes. The sailors from San Diego won all seven of their races in the largest class of 15 boats.

Altogether, there were 86 boats in 11 classes racing at this venue.

Day 1 of racing brought unusually light southeast winds of 5 to 7 knots, but that was fine with Ted Conrads and Brian Haines from San Diego YC, who ended up taking top honors in the 12-boat 505 dinghy fleet.

“We’re happy with the light stuff,” said Haines, the son of world-class competitor Robbie Haines. “But Ted and I have been sailing these boats in (windy) San Francisco. We enjoy sailing in the breeze, too.”

They started sailing 505s only three years ago when they competed in the class world championship at San Francisco in an elite fleet including Alamitos Bay YC’s Mike Martin, the winner, and Howard Hamlin, a former winner.

“We’ve been lucky to sail the boats with Howie and Mike,” Haines said. “They’re two of the best,” Conrads said, smiling, “We had a good time today.”

So did a few of the locals, including Jay Golison, who took the top spot in Laser Masters, a nine-boat fleet for the middle-aged crowd of 35 and older. The less wind the better for him.

“I like the light air,” Golison said. “I’m only 165 pounds. It’s a great boat to maintain your fitness. You have to keep yourself in shape, but when the wind blows, it’s tough to stay with the bigger guys.”

Among non-locals competing, Scott Earnest and crew Jay Cox-Chapman from Madison, Wis., had a tough day Saturday in the International 14s, but they claimed the distinction of the longest trip to get here.

Back to ‘Normal’ Sunday
After a squirrely day of light wind Saturday, racers found the “normal” southwest sea breeze building from 6.5 to 15 knots through the afternoon Sunday.

Olivier Boryn was impressed. As president of the international F-18 class, he was on a scouting trip from his home in Brittany, France, to check out the site. He watched all of the racing from the flying bridge of the race committee boat, Patience.

“We should have a wonderful regatta,” he said afterward.

But he also said that Struble and LaCasella probably won’t be the favorites. That would be Australia’s Darren Bundock, the four-time world champion and double Olympic Silver medalist in Tornado catamarans.

“Today was more problematical,” he said. “The whole fleet was doing better so we had to find our way out of a bunch of holes.”

LaCasella, 41, owns the boat that they have sailed together for three years. So why doesn’t he drive his own boat?

“We sailed against each other a lot of years,” he said. “I like being on the front of the boat. You’re more in control of the boat doing mainsheet and the spinnaker.”

So, we’ll see in September.

On the Cal 25 offshore course managed by nearby Long Beach YC, Art and Scott Melendres of Whittier finished first overall, beating out Rick Sottile and Felix Basadre of Westminster by just one point.

“The first race of the day as we were rounding the leeward mark someone let the spinnaker halyard go without anyone dousing it,” he said. “Well, it went under the boat and we shrimped it real good. We knew there was a windward mark change, and when we got it all sorted out we looked up and we were the only boat pointed toward the new mark. It looked like everyone else was headed for the old mark. If it wasn’t for shrimping the spinnaker, we wouldn’t have gotten the jump on the rest of the fleet.”             Some would say, well, that’s sailboat racing.

Editor’s note: Additional results will be printed when they become available — and they will also be posted on SCYA’s Midwinter Regatta website: midwinters.scyaweb.org.

Class winners at the Alamitos Bay YC venue are: