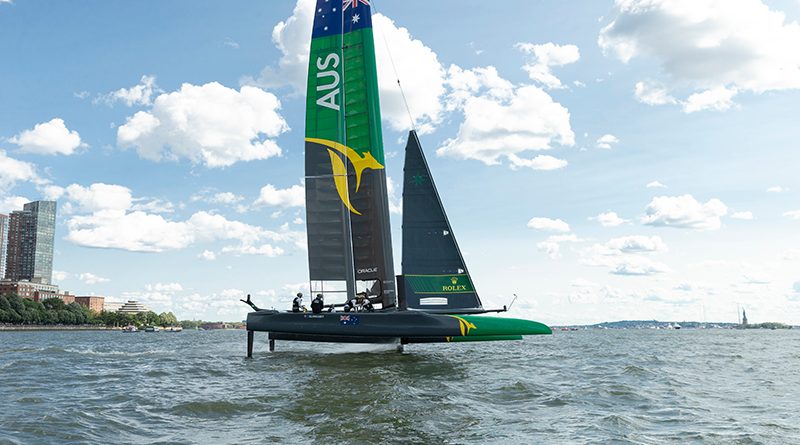 The SailGP Australia team is dominating the third season so far, holding on to a strong winning streak. Shutterstock image.

The second event of the third season of Sail GP took place over Father’s Day weekend in Chicago and saw Australia come out on top with an impressive comeback holding on to their winning streak.

“We came dead last in the fourth race and thought our chances of reaching the final, let alone winning it, were over,” said Tom Slingsby, leader of the Australia team, in a Sail GP press release. “I thought mathematically it was almost impossible to make the final race. Somehow, we turned it around, and fortune went our way.”

The final race was between Australia, Great Britain, and Canada, which is a direct parallel to the first event of the season held in Bermuda in May.

According to Sail GP, the Aussies picked up a 99 percent fly time in light wind conditions, which allowed them to dominate in the finals, creating a copy of their victory in Bermuda.

They kicked off the final with a perfect start forcing the other two teams to follow from the get-go, allowing Australia to hold on to a strong winning streak.

Australia has taken the SailGP Championship title twice and is the team to beat this season and is currently leading the board at 20 points, just three points ahead of second and third places, Canada and Great Britain.

The Australian team has four America’s Cup winners, Tom Slingsby, Kyle Langford, Kinley Fowler, and Sam Newton, who were part of Oracle for the USA in the 2013 Cup, and two-time Australian Female Sailor of the Year, Nina Curtis.

The US team, led by Jimmy Spithill, finished third place in the last fleet race but missed the mark to make it to the finals; the team is sitting at seventh place on the leaderboard with nine points.

The next event will take place in Great Britain’s Ocean City, Plymouth, July 30-31. For more information, see the SailGP website at https://sailgp.com/.