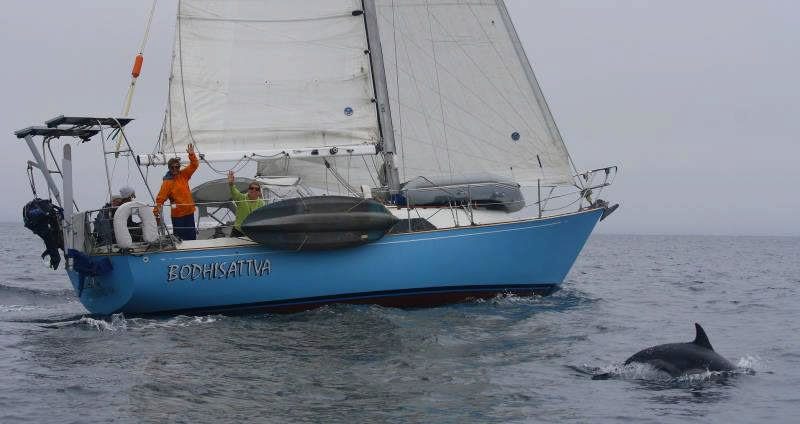 Racers will cruise the Santa Barbara Channel to Santa Cruz Island, then race back to the mainland.

VENTURA—Here’s your chance to break out of “Covid prison.” Most sailing and racing events were taken off calendar because of the Coronavirus pandemic, but there is at least one Notice of Race active on the Southern California coast: the 16th annual Prison Break, hosted by Ventura Sailing Club.

The Prison Break will be held on Aug. 29 and 30, as part of Ventura Sailing Club’s mission to “introduce and encourage people to take advantage of our great resources: the Santa Barbara Channel and the Channel Islands National Park.”

Those competing in the Prison Break race will spend the first day of festivities cruising Santa Barbara Channel to Santa Cruz Island. Sailors will kike and explore the island before racing back to the mainland “in a fun and casual group setting,” according to the Notice of Race.

Contestants will also have an opportunity to practice “’pre-modern’ seamanship skills while ‘breaking out’ of Prisoner’s Harbor,” the Notice of Race continued.

“The plan is to do a ‘LeMans Start’ from the anchorage at Prisoner’s Harbor on Santa Cruz Island,” the Notice of Race stated. “Competitors will have to wait for the horn to begin hosting sails and weighing anchors. The race will be to the Mandalay Buoy.

“If there is no wind to ‘break out’ of Prisoner’s, competitors can row, kedge-pole or tow (any method NOT using a motor of any kind) their boats out of the harbor until there is enough wind to make sail,” the Notice of Race continued.

Pre-race festivities were already held at Prisoner’s Harbor on Aug. 9.

The 16th annual Prison Break is open to all racers, regardless of whether he or she belongs to a yacht club. The race’s entry fee is waived, both for Ventura Sailing Club members and non-members. A Captains’ meeting will be held virtually.

Changes to the sailing instructions will be issues on Channel 68; contact William Young at Ventura Sailing Club for specific details. His email is wjyount@yahoo.com; you can also call him at 805-205-0999.

Three classes will be available for the race: PHRF-handicapped spinnaker; non-spinnaker; and, if necessary, Orca.

Racing Rules of Sailing will govern the race. The sailing instructions will be finalized during the Captains’ meeting.

The racecourse starts from wherever each boat chose to anchor during the previous night, and, according to the Notice of Race, “anywhere within Prisoner’s Harbor inshore of a line extending from the end of the pier west to the point marking the north westerns extent of the harbor.”

“We will race back to a finish at the Mandalay Buoy, where competitors will make their own finish times using GPS time,” the Notice of Race stated. “All classes will start at the same time. There will be no other marks.”

Trophies and prizes will be awarded to first and second place winners of each class, depending on its size.