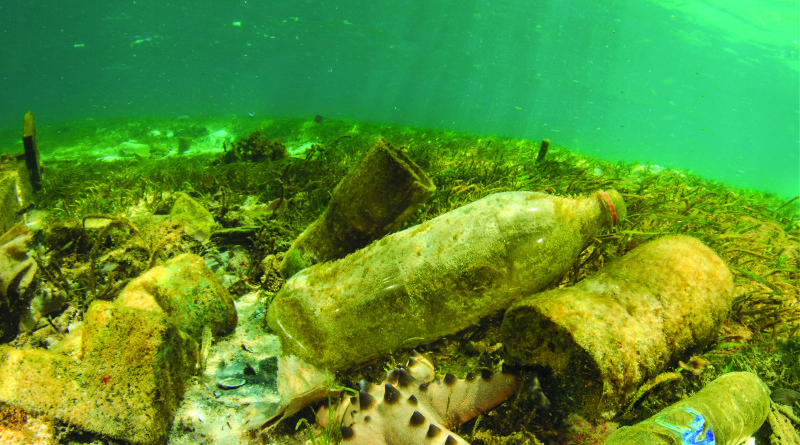 Commissioners and agency staff discuss Coastal Clean Day and ways to keep trash out of waterways.

SANTA CRUZ — Debris and trash found in our oceans is no small matter, according to a presentation made at California Coastal Commission’s July meetings. There is plenty of trash in the sea, unfortunately, but the state agency held a discussion of how to best address marine debris and ocean litter.

Some doomsday accounts forecast the time will soon come when the population of plastics in the ocean will be higher than the entire fish population combined. Other news stories weave narratives of garbage patches larger than Texas.

Eben Schwartz, a public education outreach manager with the Coastal Commission, provided an in-depth presentation to commissioners about marine debris and ocean litter and said the issue of plastics and trash in our waters could become an even larger problem in the future.

“The scope of the problem is huge and growing,” Schwartz told commissioners, adding California has been trying to do its part to combat marine debris and ocean litter for more than 33 years.

Most of the trash in our oceans originates on land, Schwartz told commissioners. Only 20 percent of the litter or trash is ocean-based. Sources of ocean-based trash include cruise ships, commercial fishing vessels and cargo ships (such as discharge of containers), according to data collected over the years.

“Our previous assumptions about the origins of marine debris were completely faulty. We initially believed most debris originated at sea and washed up on beaches. The data showed us, however, that most of the debris on California’s beaches originates on land,” Schwartz said. “Some does come from beachgoers but a significant portion actually starts on city streets and inland areas, and washes down stormwater systems to eventually be deposited onto beaches.”

The 80 percent of trash from land-based sources include litter from pedestrians, motorists and beach visitors, industrial discharge (pellets and powders) and garbage management (containers, trucks and landfills).

Schwartz said the commission, based on the data it analyzed, began making a conscious effort to address litter at the source (as opposed to collecting it where it ends up).

“We want to stop trash where it starts,” Schwartz told commissioners. “So we turned our sights east, stretching to clean up in inland communities. The goal of this effort was not just to capture trash before it has a chance to enter the ocean, but to better connect inland communities to the health of our coast.”

Coastal Cleanup Day events are now held in 55 of California’s 58 counties, according to Schwartz. More than 66,000 volunteers collected 839,632 pounds of debris during the Coastal Cleanup Day in 2017, he added. Last year’s efforts helped bring the cumulative California Coastal Day totals to 1.5 million volunteers and 24 million pounds of debris since the program’s inception in 1985.

More than 18 billion pounds of plastic, however, enters our oceans each year, according to Schwartz.

An official report on ocean litter stated most trash in our waterways originated from inland areas far from the coast. “Ocean litter” is considered as forms of trash sourced from land and eventually found in the ocean. Marine debris, by contrast, differs in that it is not necessarily sourced from land.

“Many ocean pollution problems originate on land, and in some cases, far inland from the coast. These pollution problems can range from nutrients, to contaminants of emerging concern, to ocean litter,” California’s Ocean Protection Council stated in its report, “California Ocean Litter Prevention Strategy: Addressing Marine Debris from Source to Sea.”

Removing trash from the ocean itself is the most expensive means of addressing ocean litter, commission staff told commissioners. It’s much cheaper to block the trash avenue farther upstream. It’s even more cost effective to prevent trash at the source and not allow it to reach a waterway in the first place.

Surfrider Foundation is working with dining establishments to certify them as Ocean Friendly Restaurants. Its focus is to prevent single-use straws, Styrofoam goods and the like from entering the ecosystem.

One commissioner (Donne Brownsey) hoped the public would participate in Coastal Cleanup Day, which takes place at beaches up and down the California coastline on Sept. 15, from 9 a.m. to noon.

Commissioner Mary Luevano, meanwhile, asked whether the Coastal Commission could recognize the good actors who are taking positive steps to minimize the harmful effects of waste.

Commissioner Ryan Sundberg pondered whether studies were done to analyze the sources of waste and how they are getting into our waterways.