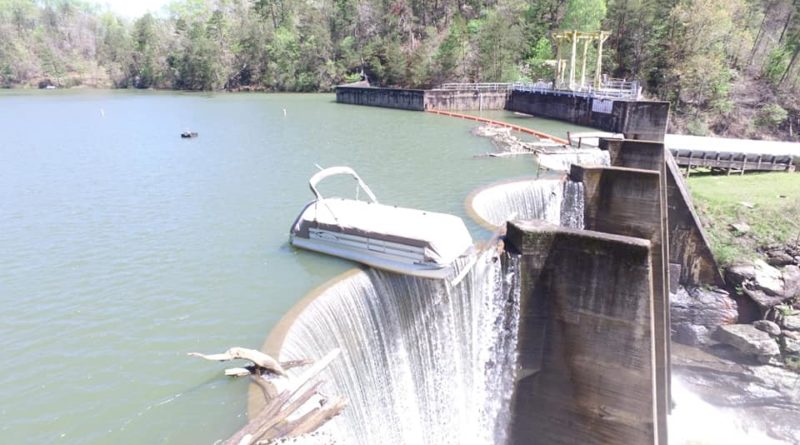 COLUMBUS, NORTH CAROLINA—It’s not every day a runaway pontoon ends up dangling at the edge of a dam with uncertain peril looming. After a stretch of heavy rain near Lake Adger in North Carolina, however, this strange event unfolded resembling a dramatic scene from a movie rather than an everyday boating excursion. The pontoon, which seemingly broken free of its binds at its dock, became stuck on the Turner Shoals Dam for more than a day.

Columbus Fire Department and other state agencies were dispatched to the scene, where they eventually freed the vessel sitting on the brink of the dam’s lip. Members of the state agencies were able to tie ropes to the pontoon and anchored an electric winch to reel it back onto the shore.

“This is one of the things you really don’t train for,” Polk County Emergency Manager Bobby Arledge said. “It was just a little nerve wracking at times.”

No passengers were aboard the boat as it teetered at the edge of the dam. Authorities allowed for the vessel to stay where it was for more than one day because there were no immediate life threats. During the stormy season, conditions near the edge of the dam, however, could have posed a threat to officers attempting to rescue the boat. On a social media post, Polk County Emergency Management stated that the heavy winds and high lake levels prevented crews from removing the boat at an earlier time.

The pontoon, according to authorities, was returned back to its dock. Videos and photos of the vessel rescue attempt can be seen online through Columbus Fire Department’s social media outlets.