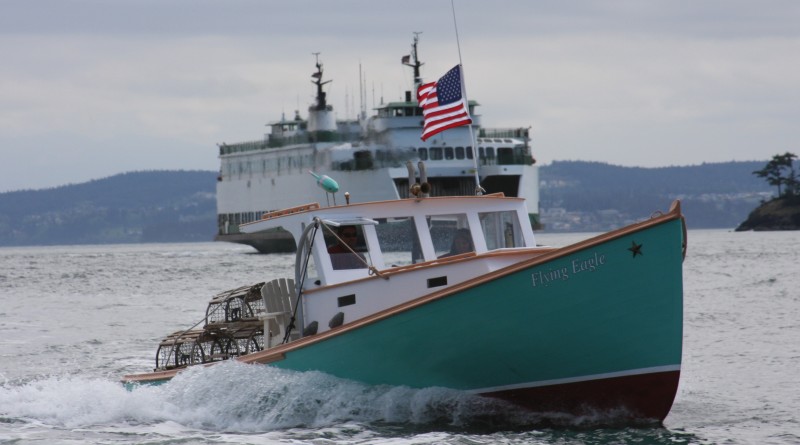 What’s in a Name: Flying Eagle was also known as Beal’s Islander and Jonesporter. She was originally named Flying Eagle when the keel was laid in 1962.

A Slice of History:Flying Eagle spent 43 years hunting lobster along Maine’s coast. She was retired from working traps (lobster pots) for about a decade now. Strollo said Flying Eagle underwent restorations in 2014 (and into 2015) at Artisan Boatworks in Rockport, Maine. The lobster boat also spent some time on land, traveling 12 days and about 3,500 miles westward by overland truck in April and May.

What’s Inside: The Down East Maine Lobster Boat features topsides, bottom, decks and stern made of cedar. The stem, frames, timbers, deck beams and keel are made of oak. Powering Flying Eagle is a 350-horsepower, V8 GM engine occupying 383 cubic inches of the 33-foot boat. Its gasoline engine has a 55-gallon capacity. The rudder is stainless spade. A VHF radio and GPS unit are also found aboard Strollo’s classic boat.

“All owners over the last 53 years have done their part in caring for Flying Eagle. Of recent times, the focus has been on preserving what once was and what will never be again,” according to a  historical narrative of the lobster boat submitted by Strollo.

Strollo said the forefoot garboards were replaced and a throaty twin dry-stack exhaust rising through the standing shelter was renewed. Other upgrades included the addition of dual batteries and charging system within the trunk cabin and a new V8 engine. The original (trap) hauler was reinstalled while a functional davit and full-bronze underwater prop cage were recreated. The patina of rust, unpolished bronze and bass was retained.

“Other than a lighter weight 2013, 383 Mercruiser gas V8 engine, Flying Eagle’s quite original, including her hull color of Newport Green and her name,” the lobster boat’s narrative stated.