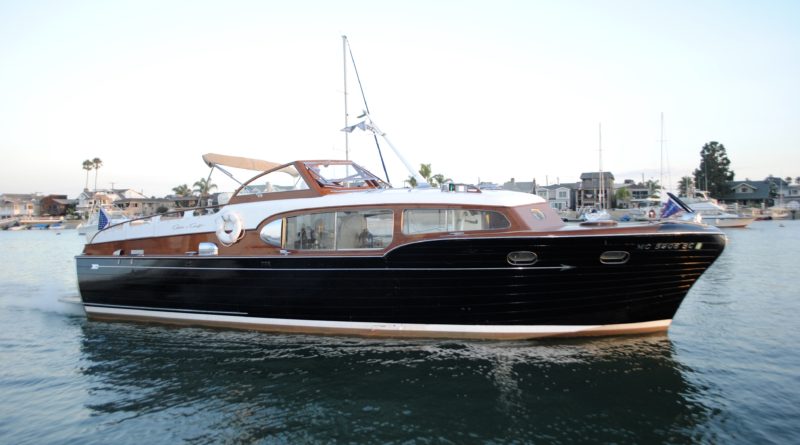 The Back Story: No Corkage was a freshwater boat for nearly 60 years until she was transformed into a saltwater vessel on Newport Bay about four years ago. This 1954 Commander Express Cruiser Four-Sleeper was built at the Chris Craft facility in Michigan. She was initially a lake boat and kept out of the water a great deal of time when the lakes were frozen. Her current owners, Karl and Lori Kreutziger, attribute this as being part of the reason why she has preserved so well over the years. They also credit wooden boat builders, Don and Larry Mayea, for her great condition as she was taken care of by them for more than 20 years when she was kept at Mayea Marina. She was purchased by the Kreutzigers when they came across her on the internet. They wanted a classic boat and were impressed with her beauty. They traveled to Fair Haven, Michigan to see her in 2012 and have been her owners since then.

Restorations: In the mid-1970s, a previous owner, Bill Buckley, replaced the original 200-horsepower Chrysler motors with 350-horsepower Chevrolet engines. In 2012, Karl Kreutzigers worked with the Mayeas to replace the rotting mahogany panels. She was transported to Newport Beach in 2013 and has had her topside stripped, stained, sealed and varnished. She is always covered in her slip when not in use.

What’s in a Name: No Corkage was given her clever name by her current owners to mean no cork was used to build this boat as well as no corkage or cost to board the boat and have a good time.

Recognition: This classic boat was featured in “The Legend of Chris Craft” publication in the 1970s. She was also part of a national photoshoot in Newport Beach for a men’s apparel company. No Corkage has received an award for “Best Animation” in the American Legion Yacht Club’s 4th of July “Old Glory” Boat Parade. She also won “People’s Choice – Best in Class” at the 2016 Balboa Yacht Club Wooden Boat Festival. No Corkage can be seen at this year’s Wooden Boat Festival in Newport Beach from June 10-11.