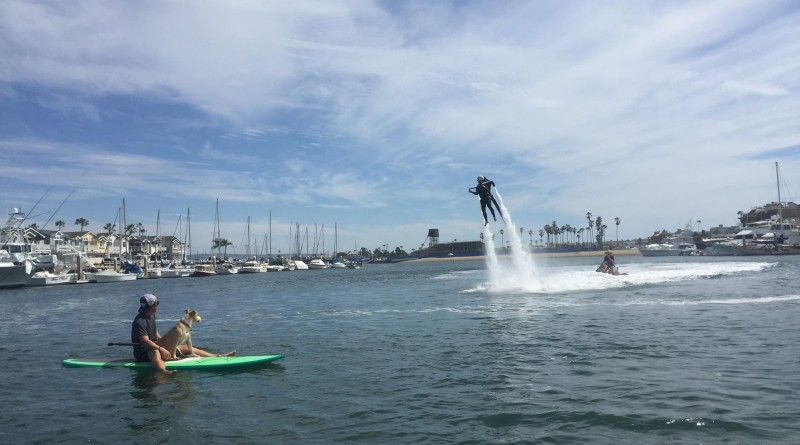 NEWPORT BEACH — What goes up must come down.

A popular yet divisive “extreme sport” activity has crashed and burned after soaring to new heights over Newport Beach as Jetpack America announced in September it is ceasing its flight center in the harbor.

The company offered its customers the opportunity to “fly” above water by essentially wearing a jet engine on their back. Jetpack America’s permit to offer such services is set to expire Nov. 13.

Dean O’Malley, president of Jetpack America, said the company’s services would continue to be offered in San Diego and Las Vegas. O’Malley, in a letter to customers and supporters, added Jetpack America would have to continue what it considered to be restrictive conditions if it sought to renew its permit with the city of Newport Beach.

“After operating for a year under our current agreement with the city of Newport Beach, our hope was that we’d be able to revisit some of the more restrictive guidelines imposed by city officials,” O’Malley wrote. “Unfortunately, we have been told that we would be subject to [multiple restrictions] if we were to continue flying in Newport Beach.”

The restrictions listed in O’Malley’s letter included no expansion of hours and limitations on use and location.

For example Jetpack America would only be allowed to operate between 10 a.m. and 5 p.m. The company hoped a renewed permit would allow expanded hours.

City officials would also continue to enforce the permit’s one-unit jetpack restriction. Jetpack America’s permit allowed only one jetpack to be in the air at any given time.

“This severely hinders our ability to meet customer demand, especially in the busy summer season,” O’Malley explained in his letter.

Jetpack America’s customers would continue to be limited to flying only in the Turning Basin, O’Malley said.

Rent and insurance were two other issues Jetpack America was unable to resolve.

“The city has proposed a rent amount that would charge us for 1 acre of shared water space in the Turning Basin, which would be more expensive than 99 percent of all other Newport Harbor businesses,” O’Malley wrote.

“Required coverage amounts were increased and new required policies were introduced, which would have tripled our annual insurance premiums,” he continued.

O’Malley informed customers the Newport Beach operations would be consolidated with the company’s San Diego location.

Jetpack America’s existence in Newport Beach has been controversial to say the least.

City Council members initially thought differently and favored some sort of jetpack activity in Newport Harbor. The good cheer did not last long, however, as the same council members were later split on whether to allow jetpacks within city limits. The split council became a 4-2 majority on May 12, 2015, when Newport Beach’s elected officials voted to grant Jetpack America a one-year permit to operate out of the Turning Basin.

Supporters and opponents were evenly divided at the May 12, 2015 meeting. A razor-thin majority of speakers (13 out of 25) who addressed the City Council on the jetpack permit issue spoke in favor of Jetpack America’s endeavors in Newport Harbor.

Opponents claimed jetpack activity in Newport Harbor was either too noisy or a safety threat to beachgoers and boaters. Conversely some said jetpacks should be an allowed use like any other activity on the harbor. One resident even cautioned the council to not ban a business based solely upon opinion.

Newport Beach Mayor Diane Dixon has been one of the most vocal opponents of jetpack use in the harbor. She was one of the two council members who voted against moving forward with Jetpack America’s permit last year.

Dixon’s council district includes the Newport Harbor area. She said many residents within her district opposed jetpack use in the harbor. Most opponents claimed jetpack activity was too loud and posed safety risks.

Jetpack America’s time in Newport Beach comes to an end within the next few weeks, almost 18 months after winning the right to exist and operate in harbor.

Dixon added she is not sure whether another company would interested in resuming jetpack operations in the harbor once Jetpack America leaves town. The city does not have any plans to seek out a successor.

“The [city] policy does state the Harbor Resources Manager can issue up to one permit,” Dixon told The Log in a phone conversation, indicating the door is still open for another jetpack operator to do business in Newport Beach.

Filling Jetpack America’s void might be easier said than done, however, based on the challenges O’Malley faced in trying to establish his business in Newport Beach.

“It was lot of effort, a lot of back and forth. After that vote came in, we had to go through the RFP process,” O’Malley said, pointing out he had to beat out other jetpack operators after campaigning at Harbor Commission and City Council meetings in 2014 and 2015 to earn a permit for Jetpack America.

O’Malley hoped the city would be amenable to easing some of the restrictions outlined in the initial permit. Allowing only one jetpack unit to be in the air at any given time did not allow O’Malley’s company to meet demand for Jetpack America’s services during peak season. Accordingly Jetpack America could not make enough money to survive off-peak season.

The city just did not have the appetite to renew Jetpack America’s permit with eased restrictions, O’Malley told The Log.

High costs combined with what O’Malley described as “serious restrictions on our operations” proved to be the death knell for Jetpack America’s existence in Newport Beach.